It’s a Horror to Know You: Cindy Auer!

What is the first film that ever scared you?

The first film that ever scared me was probably Nightmare on Elm Street. My parents did not take great care to shelter me from horror movies (they just sent me to the other side of the room to play) so I probably would have seen it when I was five or six. After that, I was deathly afraid that Freddy could pop out of MY bed or out of the toilet and drag me in or something. It certainly didn’t help matters that I grew up in a Victorian house that was previously a funeral home for 100 years.

What is the last film that scared you?

The last film to REALLY scare me is actually 28 Weeks Later. I’m incredibly freaked out by the idea of anything tearing me apart and eating me and the beginning sequence of that movie just disturbs me like no other. The infected move SO quickly and kill people so swiftly and violently. I love traditional zombies, but the infected actually freak me out. A lot. Honorable mention goes to Hannibal. I watched it again recently and, while it is probably more of a thriller, that hideously deformed guy and the wild man-eating boars make it pretty terrifying.

Name three Horror movies that you believe are underrated.

Ravenous — I’m going to echo many people and say Ravenous is definitely at the top of the list. I worked at a small video/porn store in the sticks for a couple years while finishing my degree and brought home many horror movies. I discovered Ravenous on VHS completely by mistake. It was in our thriller/drama section instead of with the horror movies and I had not heard of the movie before despite it being a big-budget movie with some fairly big names (coincidentally, it also stars 28 Weeks Later’s Robert Carlyle). I took it home and watched it and fell in love. The soundtrack is awesome, the acting was great, the characters were quirky, and the bloody showdown at the end is nothing short of fantastic. I now preach the gospel of Ravenous to everyone I know.

Black Christmas – The horror community seems to always be hatin’ on this movie for some reason. I find that it is usually the gore hounds though. I love me some gore, but it is not a necessity for me. Black Christmas, while light on the gore, delivers in so many other areas. The killer doesn’t have a motive (unless you watch the craptastic remake which you should NOT do) and we don’t even see him, except for an eye behind a door. And I LOVE that it happens during the Christmas season.

Honorable Mentions: My Bloody Valentine (original) and The Fog (original).

Name three horror movies that you enjoy against your better judgment.

Cabin Fever – all the characters are easily hated and the flesh-eating virus they get is pretty sick. Oh yeah, and some guy swallows a harmonica and chokes on it. It’s horror with a dash of humor.

Dolls – the dolls seriously freak me out. The acting is a little bit cheesy, but I still dig it. I think this movie strikes a chord with me since in the same ex-funeral home I grew up in (see above), my father kept a collection of antique dolls in the hallway on the way to the bathroom. So, yeah, I have been pretty much traumatized since birth.

City of the Living Dead – I think we can all admit that Fulci movies have their charm and also their fair share of downfalls. This one has an ending I still can’t completely figure out. I like it anyway.

Send us to five places on the Internet!

The Unknown Movies Page – obscure movies of all kinds.

Night of the Creeps – someone else brought up this now-defunct site. It was my go-to site for laughs and recommendations back in college. Not for those easily offended.

Arrow in the Head – I don’t always agree with the reviews, but it’s still good stuff.

And now for the palate cleanser: Cute Overload.

You can still get to the (mostly complete) Night of the Creeps site by way of the Internet Archive’s Wayback Machine (I also linked it on my article).

On a side note, I commend you for even being able to sit through Cabin Fever. I love Ace Ventura and Kung Pow: Enter the Fist, but Cabin Fever was stupid on a level that gave me thuh brain-pain.

Thanks C.A.! I’m glad to see another DOLLS fan here! I’m a little jealous about your victorian ex-funeral parlor house- but then again maybe that would not have been a good fit for me.

I’m happy to say I’ve never run into anyone who wanted to talk bad about Black Christmas… the sequel sure, but not the original. I’d probably get kinda shouty if they did.

I like Cabin Fever, but likely because I relate it to when I saw it and with whom… free pass with my cartoonist gang. I always liked Texas Chainsaw but the timei saw it at a midnight show and at the perfect moment a guy chased a screaming chick up and down the aisles was like handprints in cement.
Also, it may have been discussed but there’s the snake guy from Dreamscape hidden in the Nightmare on Elm Street poster. Was that Craven’s nod or the artist?

Oops- the guy had a chainsaw- you could smell the oil or whatev for the rest of the chasing!

Art T, I’ve never noticed the dreamscape snake in that poster before! I need to find out more about that. Thanks for pointing him out! 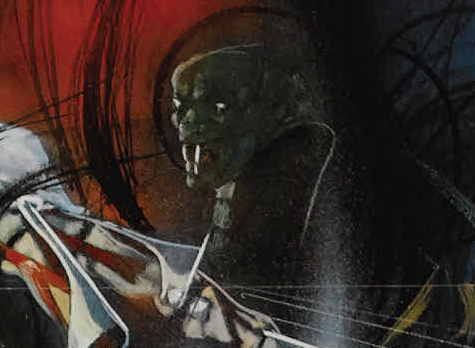 HOLY… I LOVE DREAMSCAPE. That makes perfect sense too.

Night of the Creeps has resurfaced! They have a new web address: