I’ve written to you before, and that “Name That Trauma!” has been successfully resolved, thanks to you. However, this one is much more puzzling, because the problem is that I’m not even sure I haven’t dreamt it.

I think it was a late ‘80s-early ‘90s music video. I remember that there were worms, or something that looked like worms – dark-greyish, thick, and quite short (about 2 feet long), and resembling burnt meat in colour and texture. They were crawling around in some kind of a sandpit, and the whole setting was in dark colours. The worms might have been animated puppets, or stop-motion figures, or whatever technique could be applied in the ‘80s to make these revolting things move.

Oh, yes, the most disturbing thing was that these worms had human faces. The only thing I remember about the music was that the voice was very monotonous, with nasal intonations. I wonder who could possibly make such a music video. I mean, what is SO wrong with this person?!

I clearly remember telling other kids in the neighbourhood about it. If I’m remembering this correctly, I even wanted us to play go-round-the-playground-not-touching-the-sand-or-else-the-worms-will-eat-you game or something. It didn’t work out – apparently, the mere assumption that huge worms with human faces could ACTUALLY exist, burrowed in the sand somewhere, waiting for some unfortunate kid to come near them, turned out to be wa-a-ay too disturbing to mess with it.

So, now that I have told you about it, I wonder if anyone has any ideas, because I haven’t found anything resembling this video. If it turns out that the loathsome thing never existed, I’ll give up and make an appointment with a psychiatrist!

In all likelihood that was a video from the band TOOL. They made all kinds of twisted stop-motion animation videos for their songs. I’m not a fan of the band but remember admiring their videos. You can see them on YouTube.

I wonder if this could be it….

This was in the mailbox from Rain M….

This Tool video has a yellow caterpillar with a human face…. 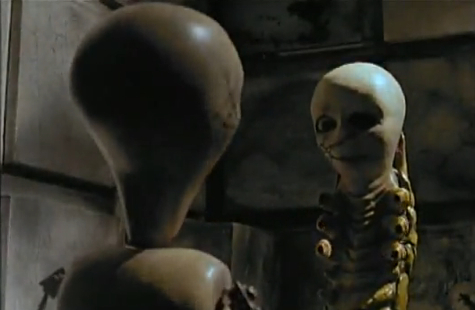 The name to search for is “Quay Brothers” for more in the style of the Tool videos. They’ve done a lot of stuff and MTV was happy to showcase it back when the channel was worth a damn.

And BD is right, Zappa’s music has inspired some wild claymation by Bruce Bickford. Look on YouTube for “Inca Roads” and “Baby Snakes” for examples.

Thank you all for the responses!
Unfortunately, among all the suggested videos (to be more exact, among those that I could find, like the Residents) I didn’t see anything resembling what I remember, although the videos themselves were definitely worth watching)) and, Asat, special thanks for the Quay Brothers.
I couldn’t find much by Frank Zappa, but what I did find was enough to doubt the possibility that the worms were claymated at all. I’m pretty sure it’s not Tool, since I’m quite well acquainted with M. J. Keenan’s videos.
Well… so far, I haven’t come across any videos with stop-motion worms either. At this point, I guess, one should start doubting if they ever saw anything like that)))