I have searched all over the internet trying to find the title to four movies I caught on T.V. when I was younger. I found the answer to the first – TOBE HOOPER‘s INVADERS FROM MARS (I always remember the people getting sucked down into the vortexes of sand). But I can’t find the answer to these other three. Unfortunately, I don’t remember much.

In the first movie, I remember a group of people, possibly older teenagers, in a room that has a television and an evil-looking man appears on the television, maybe to give them directions or taunt them or something. The room might have been some type of mausoleum or something, as I seem to remember there being a coffin in the room, and I think there was a lot of dry ice fog. The only other thing I remember is that I think the rest of the movie is simply the people getting killed in the house in various ways. The movie was very dark and I think one scene was of someone getting crushed to death by a floating coffin, maybe? I think somebody may have fallen down the stairs as well.

The second movie I remember even less. The main thing I remember was that a nurse was trying to kill some students in a high school and she killed one student by throwing a pole vaulting pole that had a sharpened end a very long distance and killing a student in front of some lockers.

That’s all I remember! If anyone can help I would really appreciate it!

UNK SEZ: I’m pretty confident that the first one you mentioned is FRIGHTMARE a.k.a THE HORROR STAR from 1982. The film’s villain makes an appearance at his own funeral via a taped message on a television, a woman is smashed under a coffin AND dry ice abounds everywhere. Check out the detailed synopsis over at HYSTERIA LIVES and check out the trailer below…

…As for the second film you mentioned I’ll let Aunt John handle that one, it’s one of his favorite movies of all time!

AUNT JOHN SEZ: Mike, I can say with the utmost certainty that your second trauma stems from the 1982 all-star slasher spoof PANDEMONIUM. Unfortunately, this chestnut has never made it to DVD and I can’t seem to find my VHS copy anywhere here in the Kindertrauma Castle to grab the scene you are talking about. Anyhows, here’s the trailer:

And here’s another classic scene with CAROL KANE, EILEEN BRENNAN, and some dirty pillows:

UNK SEZ: The third film you’re looking for sounds a lot like ROGER CORMAN‘s BUCKET OF BLOOD but you mentioned red clay and that one is in black and white. If the trailer below doesn’t ring a bell, maybe one of our knowledgeable readers has a better guess?

UPDATE: Although FRIGHTMARE is correct, Mike tells us that the second film he was looking for was actually FATAL GAMES from 1984 (kudos to reader Magired for solving that one!). He has also confirmed that the third film is 1973’s SCREAM PRETTY PEGGY, thanks go to our old pal Senski of HEART IN A JAR for figuring that one out (and Craig for backing him up!). Thanks to all who helped Mike solve his trio of mysteries, check out the comments for further details!-UNK

You guys are so awesome. 🙂

Could the last one be Scream Pretty Peggy?

Could it have been the remake of A Bucket of Blood(1995), with Anthony Michael Hall and Justine Bateman? I cant find any pictures, though

Oops, I guess I should have followed the Svengoolie link before I said that.:)

Hey, I think Senski’s right on this. I remember a lot of weird red clay in Scream Pretty Peggy.

You know the second one could be 1984s Fatal Games. That film features a killer nurse who uses a javelin which I guess could be mistaken for a pole vault pole.

@magired: As for Aunt John‘s “utmost certainty,” he just said “Hey, whenever I see a chance to post about Pandemonium, I’m going to take it!”

We can’t trust him, he’s got Pandemonium on the brain!

Here’s a pic that has one of the sculptures from Scream Pretty Peggy…. 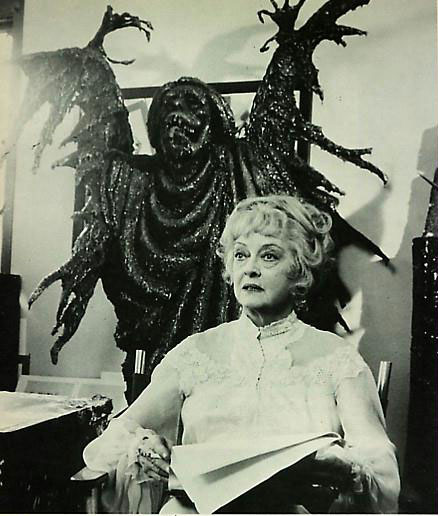 …it looks like House of the Devil meets Burnt Offerings meets That Girl!

How can that not work?I’m tracking it down.

We’ve yet to hear from Mike but I’m thinking it’s going to end up being:

1 FRIGHTMARE
2 FATAL GAMES (Magired, Aunt John thinks Pandemonium is the answer to everything.)
3 Scream Pretty Peggy (Senski, what would we do without you!?!)

P.S. I got Aunt John a set of Pandemonium lobby cards for his birthday a couple of years ago….

I found Scream pretty peggy on this VEOH site but you have to download a player has anyone tried VEOH before?

I’m pretty sure that I saw Scream Pretty Peggy (isn’t that a wonderful title?) at least twice, but it didn’t leave much of an impression. However, ABC used to run promos for their Movies of the Week incessantly, and it was not unusual to see one 20 or more times before the movie aired. The one for SPP ended with a shot of Ted Bessell (oh, Donald!) placing an oversized head on one of his big red clay sculptures, and you could clearly see a woman’s body inside. So, y’know, giving away an important plot twist in a preview is not exactly a recent development.

Boy, the smart folks who mine those ABC MOTWs for either DVD releases or re-make fodder could make a helluva lot of $$$…there’s some awesome plots just waiting for the taking.

Wow! Wow wow wow.
I can’t believe you guys found these. This makes the entire internet worth it. I have thought about these movies for years and really thought I would never find the titles.
I’m certain Frightmare and Scream Pretty Peggy are correct, and 99% certain Fatal Games is right. I have to watch Fatal Games and see the scene from my memory, but when I watched the trailer for Pandemonium it didn’t seem right. The movie I remember was lit very dark and didn’t seem remotely funny. I’m pretty sure Fatal Games has to be it.
I still can’t believe you guys knew them. And so fast! I was sure I was asking too much and the memories were too vague. Seeing the weird sculptures again! I forgot how wet looking they are.
I can’t thank you guys enough. This is amazing.

Oh, this is Mike by the way!

I was able to find a copy of Fatal Games online and it is definitely the film. It looks like Frightmare is on DVD (I was reading the plot description and forgot about the scene where the guy’s tongue gets ripped out – maybe I blocked it out of my memory). I want to watch Scream Pretty Peggy on that Veoh tonight. Also, even though Pandemonium wasn’t the movie I was thinking of, I really want to see it now. It reminds me of this movie G.O.R.P. that I love that is also not on DVD.

Great to hear from you! I’m glad we were able to solve all three eventually (thanks to Senski & Magired). I too downloaded the Veoh player and shall be watching Scream Pretty Peggy soon. I’ve never seen G.O.R.P but Pandemonium has always reminded me of i983’s Hysterical with the Hudson brothers…

I’m late to the party owing to a burnout on my motherboard, but if you seek a copy of “Pandemonium,” the magic word you seek is “Cinemageddon.”