Kindertrauma…what a site! Surely the only thing better than poring through confessions would be to submit one of my own…but someone’s already purged themselves of HERBIE HANCOCK’S ‘Rockit’, and my other trauma may be a little too obscure. I do have a Name That Trauma, but it’s not a film. It’s a game. A board game, of all things. Is that allowed? I’ll press on anyway…

Late 1980’s U.K. – I was 9-ish and enjoying the last day of term before summer holidays. It was tradition for us kidlets to bring toys and games on the last day, and one boy had brought in an odd board game. The first unnerving thing was that no one seemed to want to play it. He eventually scrounged a few victims, me included, and we huddled in a corner away from all the Guess Who’s and Mouse Traps.

Now I loved my Horror Top Trumps. Indeed, I was one of those designated odd-kids who love anything creepy or monsterish or plain weird. But this? This was different.

I remember the actual board being quite large, the players looking down through an invisible ceiling of a many-roomed castle. Each room had a different and nightmarish feature. One showed a wall weeping from a pair of drooping eyes. Another was The Bloody Room, the walls splashed with gore.

Then there were the game cards. I think they represented monsters the player had to encounter upon entering certain rooms. I only remember two clearly; the Spider Woman was one, her arachnid body capped with freakish human face. The second was a demure looking woman in profile. On the back of her head, nudging through her hair, gaped a pair of inhuman, fleshy lips. Oh God.

But the rotten cherry on top is this; the centre of the board held a grey plastic mound with three or so holes. Each player had a small plastic sword. At the crux of the game players would push the sword into a hole to hear one of three sound effects; a fanfarish sound that meant you had won the duel against the invisible opponent, a metal clash signifying a draw, or, worst of all, a sinister chuckle.

Even now I shiver when I remember that chuckle, or my brain throws up the memory of Skull-Mouth Lady.

Everyone I mention it to thinks it’s Atmosfear (it’s not), or that game where a glow-in-the dark skull falls down plastic stairs (nope again).

Please, Kindertrauma, help me learn what this bloody evil game was!

UPDATE: NAME THAT TRAUMA SOLVED! Special thanks to reader senski for knowing that the game in question is called HORROR HOUSE.

Mojo-Lil, I have been looking at eBay this morning and this game sounds like a possibility. It is called Ghost Castle Haunted House Game by Flair Games. I may be way off, but it is worth a try.

Mojo-lil, the name of the game is “Horror House,” and here’s a scan of the playing field…

I peeked at the scan and glimpsed the weeping room in all its dreadful glory – I sense many shivery moments ahead when I eventually pluck up the courage to have a good look at that board.

Bittersweet thanks to you all!

Looks quite interesting, any idea where can I get this?

I’m giving them points for including the kappa, a Jp. monster that resembles a duck and tricks children into drowning. So far, there’s been cutesy versions-

and the most famous kappa creature, Golduck from “Pokémon”- 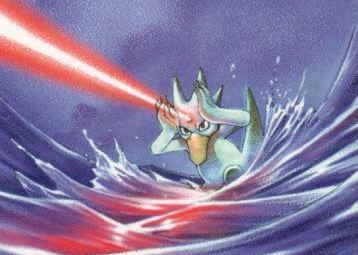 who just likes to flirt with girls in the anime.

But WOW, I’m glad this wasn’t in the US as a kid, because I would’ve had nightmares, too. o_0

I’m so glad you found/knew it, senski.  I must have spent a good hour and a half at that same damn site trying to find it!  It looks AWESOME.  That creepy doll card would have freaked me right out when I was young.  Even now, practically.

These are some nifty monsters… I recognise quite a few of ’em from here:
http://www.obakemono.com/
(the woman with two mouths, the long-neck, and the huge-headed monster for instance. Fortunately no ‘slit-mouthed woman’ though, as she is likely to send any child screaming from the room.)
I’m sort of sad that I didn’t encounter this game when I was the ‘right’ age, but then again not.