Aside from having an oddly large police force, the arid mountain town of Santa Ynez is home to a murderous muscle car who does not like to share the roads with bicycle riders or French-horn playing hitchhikers. As the police investigate the series of vehicular murders, the killer car accelerates the body count by plowing down the Sheriff (JOHN MARLEY). Handlebar mustachioed and helmet eschewing motorcycle cop Wade Parent (JAMES BROLIN) assumes the role of Sheriff while juggling relationships with his assertive girlfriend Lauren (KATHLEEN LLYOD), and criminally underutilized daughters (Kindertrauma faves KIM & KYLE RICHARDS). When the car disrupts the marching band practice for the annual parade, it is loud mouth Lauren who questions the manhood of the car’s unseen driver. Silly Lauren learns soon enough that this car suffers no attempts at emasculation lightly when it comes crashing through the front window of her elegantly appointed bachelorette pad. Rather than grieve the loss of Lauren, Wade gets together a posse, consisting mainly of cops and the town’s domestic batterer/explosive expert, and heads out to nearest canyon to trap the car and blast it back to the hell from whence it came.

Imagine if you replaced the great white shark in JAWS with a 1971 Lincoln Continental Mark III, switched out the JOHN WILLIAMS’ foreshadowing music with a blaring car horn, and moved the whole production from the beach to a dusty desert. This is the basic construct of THE CAR and, sadly, it ends up stalling halfway through the picture. There’s a huge pothole in its plot, like a basic explanation of where the car came from and why it is so damn evil. I would have settled for a used car salesman who set up a dealership on an Indian burial ground. Despite otherwise fine performances from BROLIN, and a supporting turn from WALLY COX as a deputy who falls off the wagon, THE CAR left me running on empty.

Hey Lauren’s house looks just like mine did in 1978! Except I finished my Brolin portrait years ago.

My brother and I used to watch this every time it came on TV, which seemed to be quite often. It actually scared the crap out of us, for while we lived in a landlocked state and thus felt ourselves relatively safe from rampaging sharks, we rode our bikes everywhere and the idea of a demon car mowing us down hit home. And an indelible scene you didn’t mention stuck in my 7-year-old brain–the final asplosion of the car where you could almost…could you?…see something evil moving in the flames…

I didn’t mind the lack of explanation so much, though I agree the used car dealership/Indian burial ground would have been GOLD. But obviously that’s what the LaVey quote is about–he invoked the demons to appear, and they did…in a Lincoln. Even Satan says “Buy American!”

One of my all-time favorites! I just bought the reissued DVD – this’ll definitely spur me on to sit down immediately and watch it again. Love the demonic face that rises up in the smoke when the car explodes at the base of the canyon. Classic!

@Vicar: The one thing I did take from this movie is that JAMES BROLIN portraiture is impervious to vehicular destruction, whether it be demonic or alcoholic in nature: 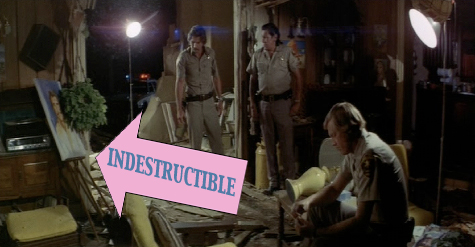 It is a solid design choice!
0

I’m so jealous. Everyone has a snazzy James Brolin portrait but ME!

Just one nit to pick:  The supporting actor was Ronny Cox not Wally Cox.  (Wally Cox had passed away in 1973.)