Personally, I believe it’s a milestone in the loss of one’s innocence: learning that you can die with your eyes open.

Up to a certain point in childhood, any death you see on-screen ends with a dramatic last gasp and closing of the eyes, like the person died by some form of lethal exhaustion. But eventually, you watch that “grown-up” movie or show where it doesn’t happen that way: somebody dies with their eyes open, and it traumatizes you in a landmark sort of way.

For me, this revelation came as a one-two punch in the form of two lesser-known films from the ’70s — neither one a horror film and both, strangely enough, starring BURT REYNOLDS.

One is 1976’s GATOR, where JERRY REED (in an underrated bad-guy performance) blows a hole in JACK WESTON with his sawed-off shotgun. We catch a fleeting glimpse of WESTON‘s lifeless body, eyes and mouth open, as REED douses the room with gasoline and sets it on fire.

The other is 1975’s LUCKY LADY about rum-runners during the Prohibition era. In a scene where are heroes (REYNOLDS and JAMES CAAN) are ambushed on a cargo boat, bad guy JOHN HILLERMAN (no, not MAGNUM PI‘s beloved Higgins!) machine-guns down REYNOLDS and CAAN‘s protege, a very young ROBBY BENSON. As REYNOLDS and CAAN lay wounded as well, they roll over to see BENSON slumped on his side, his pretty-boy eyes wide open and glazed over in death.

Lancifer and John, I put the question to your readers:

What was the first movie or T.V. show that showed you that you can die with your eyes open?

AUNT JOHN SEZ: That’s a really good question FilmFather. As a kid, I was of the school of thought that when you died, you ended up with your legs in the air, like a recently deceased horse in a cartoon. In hindsight, it makes no sense, but I really thought a pair of legs at a ninety degree angle was a sure sign of death. As for the eyes wide open approach, I am drawing a complete blank. Readers, please sound off in the comments or shoot us an email.

Admin
unkle lancifer(@unkle-lancifer)
The first thing that pops into my mind is Nancy Loomis’ death in the first Halloween. Her eyes are wide open and then they close and then suddenly are wide open again as her chin hits the car horn and it starts to blare. One of the best though is from Hitchcock’s “Frenzy”, I give it extra points for including a protruding tongue! 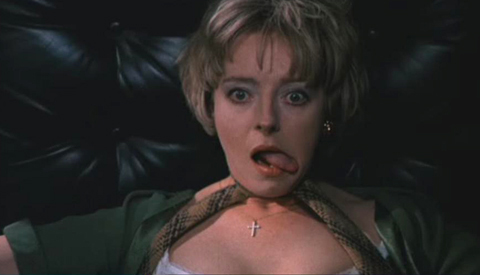 I don’t know if its the first, but “Psycho” pre-dates “Halloween” and we see Janet Leigh’s eyes open after she’s stabbed to death in the shower.

Janet Leigh’s death in Psycho is the first that pops into my mind. I don’t know if I saw an “eyes-open” death before that but that’s the one that really made an impact on me. 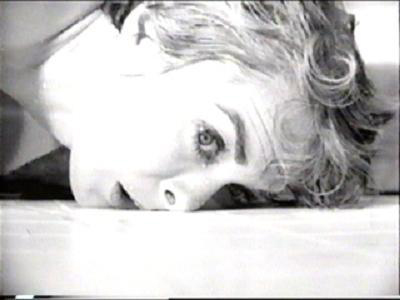 Say what you will about Psycho III but does anyone remember that scene where Diana Scarwid (sp?) passes out and it’s seamlessly immersed with Janet Leigh’s death in the first Psycho? I love that scene!

I think Nancy Loomis is the one that had the most impact on me. Plus, as you know they say “The eyes are the windows to the soul,” so when the soul passes, just what are we looking into.

It may have been Janet in the “Psycho” shower scene but I also remember WAY back in the mid 70’s seeing crazy Marjoe Gortner dying with his eyes open in “Earthquake”.  Crazy Marjoe attempts to rape a pre “Dallas” Victoria Principal but L.A. policeman George “Naked Gun” Kennedy shows up and he shoots Marjoe dead!  He falls on his back and he has a wild crazed look on his face with his eyes wide open!  THAT may have been my first introduction to people dying with their eyes open!

I’m way late on this thread but it triggered my own frightening memory of seeing somebody on TV dead with their eyes open.  I believe it was right after the ship rolled over on The Poseidon Adventure.  People were walking through the wreckage and there was a dead man kind of propped up next to a stairway and he had one eye open.  It was an insignificent scene in the movie but it scarred me for life!  FatherOfTears I also remember that scene in Earthquake and it also scared me just as much as the one in TPA!