If anyone ever asks me to name an underrated horror heroine, remind me that I want to say Cynthia (SARAH TORGOV) from AMERICAN GOTHIC (1988). It’s not hard to guess why she’s never gained much traction with the horror crowd; she’s not butch, bookish or boob-centric. In fact, she starts out as kind of a drip. It’s not where you begin but where you are going that matters though and glum Cynthia is going to the best place of all…crazy town!

When we first meet her, she is being released from a mental hospital! Is there a better time to meet a person? It’s no wonder she’s a mess and a half, it turns out she’s committed the ultimate blunder! One day she was giving her baby a bath when the phone rang and she just left for a second and then…zoinks! That’s some pretty heavy baggage and that’s why I don’t give my cats baths. In the interest of taking it easy and getting her mind off the fact that she killed her baby so that she could answer a stupid telephone call, Cynthia jumps in a plane with a bunch of people she has no business being friends with and takes a trip! Only God must truly hate Cynthia because he places her plane down onto an island whose inhabitants are super counterproductive to her recovery.

Talk about your island of misfit toys. There’s fair weather religious nut Pa (a fire breathing ROD STEIGER), prudent Charleston fan Ma (a hard not to love YVONNE DeCARLO) and their three less than adorable moppets: Fanny, Woody and Teddy (JANET WRIGHT, the legendary MICHAEL J.POLLARD and WILLIAM HOOTKINS, respectively). The kids are pushing fifty but act like they are twelve and please remember this was released in 1988 way before Facebook made such behavior the norm. Cynthia’s pals make the deadly mistake of scoffing the backwards ways on display while I only wish I could book a weekend stay. No cars, no lights, no motorcars… not a single luxury, unless you consider having a giant swing next to a cliff so that can you push people to their doom a luxury, which I do. If Cynthia would open her eyes maybe she could learn something here. As somebody who is having trouble letting go of the past she might take note of how that same approach to life has hardly benefited her demented hosts. Are these frozen-in-time, perpetually stunted human defects her future if she doesn’t get a grip? Yes. In the meantime her snotty friends must die one by one in increasingly gratifying ways.

(Kinda spoiler-y) Perhaps the only reason that Cynthia survives longer than her buddies is that darling Fanny takes a liking to her. Cynthia’s emotional state so closely mirrors the family’s folie a cinq that she glides smoothly into ponytail-enhanced Stockholm syndrome. This is a great turn of events…for me! What nobody has bargained for is that Cynthia’s secret power is insanity and Fanny owns the exact key to click her switch to berserker mode…oh you know, you might have one around the house too… a dried up baby corpse! Cynthia’s resulting transformation is better than your average slasher-chick metamorphosis from dishrag to ShamWow. It’s as if a crazed understudy has pirated the part. It’s not the first or last time a horror character has switched sides mid-game but it’s one of the few times where it’s handled in a way where it makes absolute sense. Ultimately Cynthia is not playing on any team. What’s she’s raging against is the same thing Pa renounces when he’s presented with the death of his own offspring, the absence of a higher power who cares enough to stop such horrible things from happening.

Fittingly JOHN (INCUBUS) HOUGH’s AMERICAN GOTHIC borrows freely from the classic horrors that walked before it while indulging in whatever eighties excesses it cares to. Although it’s a kissing cousin to many films from PSYCHO to THE BABY to MOTEL HELL to maybe even JOHN WATER’S PINK FLAMINGOS, it probably shares its strongest kinship to WHAT EVER HAPPENED TO BABY JANE? In both cases we’re dealing with eccentric outsider characters that are somewhat comical on the surface and downright tragic at their core. As amusing as AMERICAN GOTHIC’s billowing black comedy antics often are, it’s only one hopscotch jump away from hitting upon something deeper. When it’s not dealing with infant death and the questioning of God, it puts forth a generational clash between old and new ways that exaggerated though it may be, is recognizable as a true American constant. This movie has more than its share of mentally ill oddballs bouncing around yet in the end, it seems the big baddie looming in the shadows might be cruel, heartless time itself and the ambivalent way it tends to make mincemeat out of those who lag behind. It’s not the scariest movie in the world but this is one baby you should not throw out with the bathwater! I’m sorry; I just had to do that.

Another forgotten classic. I haven’t seen it in quite some time but I do recall being disturbed by it every time I watched it. I used to have the Grant Wood inspired poster that I got from a video store back in the heyday. Sadly that is long gone.

I’ve always loved that movie poster! My favorite part is the screaming people in the window! For some reason they are not on the DVD. 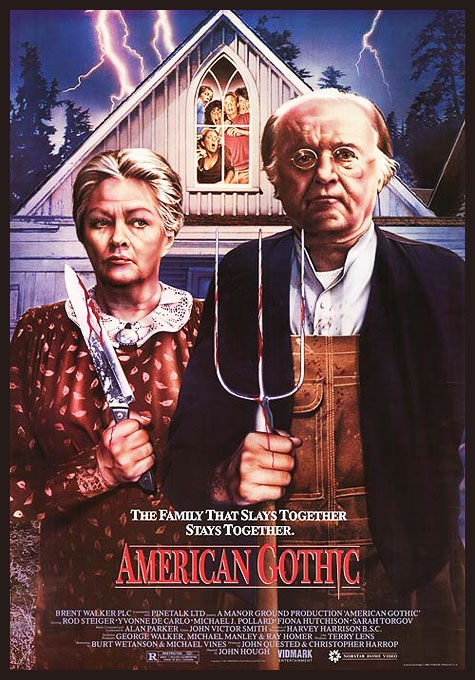 I remember that swing scene creeping me out to no end. There’s something about how it’s constructed that really bothers me. And forget the brother/sister/cousins/husband/wife kooks, GAH!

Wow, Unk, just wow. Do you write professionally and/or does Kindertrauma pay your bills? You damned well should, and it damned well should. I’m consistently blown away with the writing for every entry, and I wish you lived closer so we could hang out. (I did want to mention one very small thing, however, which is you have as typo with “Pyscho” above.)

Anyway, “American Gothic” is now one more movie I need to add to my “must see” list.

By the way, you shouldn’t refrain from giving your cats baths. I’ve done it before and they love it. The fur stuck to my tongue, but other than that it was great. (Credit due to Steve Martin.) — ∆☩Y§ ☨♆∀☥✠

That is a great scene! It’s funny though, Pollard only only seems to chop one swing rope and the whole chair flying!

Thanks for the heads up! My spellcheck must be sleeping on the job! And thanks for the compliment too! Kindertrauma pays me in lovely moths that fly out of my wallet whenever I open it!

“from dishrag to ShamWOW” is going straight into my quotables bin.

Thank you for reviewing this piece of crap. I was an extra, in the mental hospital scene! The thing is, it was filmed in a real mental hospital (the ward in the movie was shuttered), and the highlight was being lead by an inmate on an unsanctioned tour of the grounds. The thing was, we were paid, dressed up and given lunch, but we were never actually used in the shoot! Actually the best part was lunch, Sarah actually sat next to me in the bus where us extras were huddled together for warmth. She was not too much of a star to not pay attention to us. This was a Canadian/British production, and I must say we were treated better than on the X-Files, which was also shot at this mental institution. No, I was not a paitent!