I’m about 23 now and I have a VERY vague memory of something I saw that scared the crap out of me when I was 7 or 8 years old. I don’t know where it was, I want to say Sesame Street since I watched it so often, but I also watched Cartoon Network back then and it might have been from there.

It was this red (possibly orange) demonic looking thing animated in CGI. It may have appeared on a screen or monitor. It had these creepy yellow eyes and I recall a mouth that looked like a vent… I remember it had a deep evil voice, and that at one point it said “Who am I?” and laughed evilly. That’s the ONLY thing I remember about it.

I saw it for a short time and every time it appeared I’d run out of the room. If this was SS, I think they took it off because it was scary. This thing gave me nightmares and I wanna know what it was!

Can this be your trauma? ? 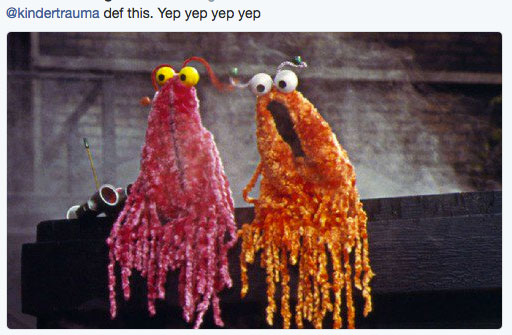 I know EXACTLY what Chik is talking about. Swayzak, a computer virus character that appeared as part as a week-long event on Toonami back in September 2002. My sister tried to send a write-up about that event once but I don’t think you ever published it. The vent mouth, computer monitor, and what she recalls it saying were dead giveaways.

Yes, it had to be Swayzak. My cousin was freaked out by him too, although it was more in his game appearance, when he’d do this ear-piercing laugh.