Thank you so much for your awesome website. It is such a brilliant idea and endlessly entertaining. I helped name a trauma (Celia: Child of Terror) and someone else’s submission helped me find one of my own traumas that I’ve been searching for (the Living Dolls short from USA Saturday Nightmares). I’ve also found out about so many great movies from the kindertrauma community that not even my endless perusals of the Psychotronic Video guides could help me come up with.

Well it’s time I submitted my trauma and hope somebody knows what the heck I’m talking about. I so hope to finally find this movie that has been gnawing at the edge of my subconscious for almost 20 years now. I saw probably the first half at a slumber party when I was about 9 or 10. This would have been the early ’90s but the movie looked older, possibly late seventies/early ’80s. It was in color and I believe it was rated R. I used the rating as my excuse for why I ran out of the room when I got scared. I told the other girls I wasn’t allowed to watch R-rated movies and I didn’t want to get in trouble.

As far as the plot goes, I believe it was about a family of four (mom, dad, two boys) and one of the children was evil. I only remember two scenes. One was a car driving down a dusty road. I know that is not very descriptive but it sticks out in my mind for some reason. I want to say that scene was followed by a crash but I can’t be sure. The other scene I remember was of the family eating dinner. The evil brother somehow made it so the family’s food was covered in maggots or mold or something else gross. The non-evil brother was telling the evil one to stop and the parents seemed to be less freaked out than they should have been. That’s it. Thats all I remember. I hope someone can help. Also, I know it sounds a lot like Cathy’s Curse, with the car crash and the kid making the food gross but it definitely wasn’t. Thank you so much for taking the time to read this. I hope it makes it to the site.

UNK SEZ: Thanks Elizabeth! I’m afraid I don’t know the answer to this but I bet one of our savvy readers does! It’s funny that you should send this Name That Trauma in now as I have been recently semi-obsessed with the rotting food trope! It started when I was watching GRAVE ENCOUNTERS in which there is a scene that involves a container of food supplies which is suddenly found rotting and filled with worms. It instantly reminded me of CATHY’S CURSE and I thought maybe I should compile a list of horror movies that involve rotting food. I did not get very far, so I’m going to put this out to Kindertrauma readers; even if you don’t know the answer to Elizabeth‘s query can you name some more movies that have a rotting food scene in them?

Here’s what I got so far…

A NIGHTMARE ON ELM STREET 5: THE DREAM CHILD

I’m not sure about the “Name That Trauma.” But rotting food: SUSPIRIA!

I also want to suggest Hellraiser as an addition. And perhaps this one is really stretching it but Labyrinth. Even if the little green worm in that apple is cute in comparison to all of the ones you listed…

I dont know but it sparked a memory of a movie my Dad was watching on cable in the 80s . I walked thru the room and caught a bit and have always wondered what it is. Its one of those Little Kid Is Evil movies and the scene I remember is somethings cooking in the stove and the kids standing there as if waiting for the food to be ‘done’. when the grown up (mom? dad?) takes the food from the oven it has maggots all over it.
Anyone?

I think I’m going to add the turkey form THE HORROR SHOW. It doesn’t rot but growing a human face is just as bad.

I do hope we get to the bottom of Elizabeth’s NTT, I love evil twin movies.

I’ve seen two of these bad food movies in the last few days. In Mirror, Mirror, William Sanderson has dinner with Karen Black and Rainbow Harvest in their haunted house, and suddenly the chicken he is eating is crawling with maggots. Yum!

Also, Gothic has a scene with leeches appearing in the food.

If that’s the case, you need to see the After Dark original “Seconds Apart”.

Also, I remember some weird horror movie from the 80’s where something has cursed or contaminated an area in the country. In her kitchen, an overweight old woman with crazy hair cuts into an apple and its core is completely rotten, black and oozing. She yells and drops it into the sink or onto the counter. If I remember correctly, whatever was contaminating the area was driving the people insane as well.

“Maggots, Michael. You’re eating maggots. How do they taste?”

I’m sure that all would agree that Kiefer Sutherland was great in that film…..

Oh, and Unk, I must also remind you of the awesome/disgusting scene in “Minority Report” in which a blind Jon Anderton (Tom Cruise) accidentally passes over a fresh, tasty turkey sandwich and instead takes a big bite out of the most foul-looking, rotted sandwich I have ever seen and then attempts to wash it down with a swig from a jug of green, rancid milk. Not a horror film but, IMHO, a very entertaining ride.

bdwilcox made me think of the grandaddy of all gross food movies. THE CURSE with Wil Wheaton. I have a pretty strong stomach when it comes to Horror but THAT one will really put you off food.

Something contaminates the crops and the people in the town keep eating the obviously rancid food anyway. Well, except for Wil Wheaton! He dont eat it. LOL

Not the best movie ever made, but rates really high on the Skeeve-o-meter if thats your bag.

#1-Yep, the attic in “Suspiria”. I think there are maggots in “Blacula” as well.

Oh, for us MTV kids of the 80’s there was this little gem:

Unk: That IS quite a coincidence! I love the rotting food effects in movies too. I really hope we can figure out what this movie is so I can see it again (without running out of the room this time). Oh and that Nightmare on Elm Street gif had me rolling on the floor laughing. I can’t stop looking at it and cracking up. 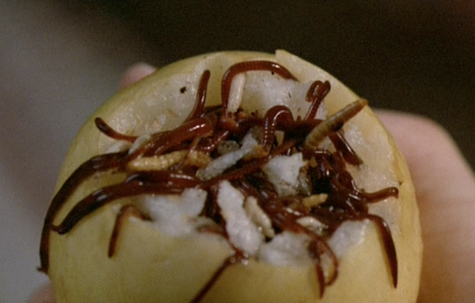 Oh come on, I was eating pizza bagels when I clicked on this…