Probably early-mid ’70s anthology horror T.V. movie/special, not part of a series, which means it could be ABC.

Male child killer, possible family member, kills child, and then in the mansion where it took place, is tormented seemingly by the dead child.

At the end, child killer is on long winding stairs leading to ground floor, at wits end. I’m not sure who says this, but he is told that the dead child couldn’t be here, but he sent us to etc, etc. Screams, black out.

Scared the shit out of me. Don’t remember anything about the rest of the anthology, but I think there may have total three stories. But I was too traumatized to remember the other two parts!

UNK SEZ: My bet Ken J. is that you were rightfully terrified by the last segment of DAN CURTIS‘ 1977 anthology DEAD OF NIGHT entitled “Bobby.” Check out the clip below and my review from long ago HERE! Wow, I just watched the scene again myself and it just never stops being scary does it? BTW, “Bobby” was remade by CURTIS in 1996 and appeared as the second segment of TRILOGY OF TERROR 2!

This NTT got me to watching Trilogy of Terror 2 last night. I have to say that the remake of “Bobby” is not nearly as good.

It’s interesting though to see a director tackle the same material twice.

I liked that they made it more clear that Bobby was abused by his mother but the kid is not as effective, the soundtrack is very loud and pushy and the final shot of Bobby as a demon thing is really bad!

It’s kind of a great illustration of the difference in approach between 70’s and 90’s horror. I’m sure they thought the make up effects were an improvement but they’re not.

It’s like a rubber mask and there’s no identifiable person beneath and it just ends up looking silly…. 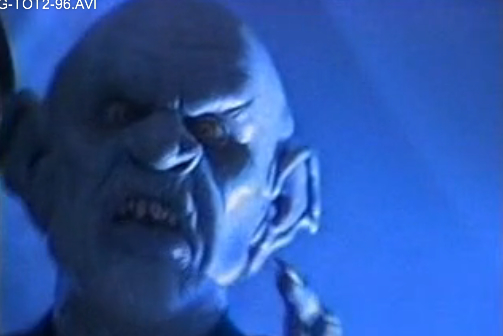 I didn’t see this when I was a kid (and I haven’t seen the 90s one at all) – but when I watched it a few months ago it totally gave me the creeps. The ending is really freaky – but the part that really stuck with me was that phone conversation the mother has with who she thinks is her husband. There’s something about phones and wrong voices that I just find so creepy.

I agree that phone call is freaky. It seems so normal at first, almost a relief and then the voice starts mocking her and changing and you realize that the horror is bigger in scope than you thought.

That part I think carried over better to Trilogy 2. Still, everything in Trilogy 2 is pretty much the exaggerated, overdone version of the original “Bobby” and it really shows you how a subtler hand can be more

effective especially when dealing with supernatural elements. “Bobby” is based on a story by Richard Matheson and I think I’m going to track that down and compare that as well.

Hmmm. Never saw the original but I agree that it was much, much more effective – the rubber mask turns what should be horror into a moment of pure silliness.

I liked Trilogy of Terror 2 mostly because TV movies like that in the 90s were so rare, but overall, I agree, it’s not a particuarly great anthology (but I do like that little Fetish doll a lot in the sequel!)…

I think I had seen the Trilogy of Terror 2 version of Bobby 1st and thought it was OK. I only saw Dead of Night a few years later when my boyfriend (now husband) had a copy and gave it to me — it was love! The original Bobby is amazingly creepy and even though Joan Hackett can be a bit trying, Lysette Anthony can’t even hold a candle to her. Hackett had a way of making really irritable characters quirky and charming. She was so lovely and unique. I miss her.

And who knew Bobby would become such a hunk! What a cutie pie he was in Girls Just Want to Have Fun!

Kind of off topic, but I believe Joan Hackett’s gravestone says something like “Leave me alone, I’m sleeping.”

Quirky til the end! Bless that woman!

I actually really liked the first story in Trilogy of Terror 2. It’s the typical assholes get their comeuppance anthology tale but hey, giant rats!

The other two tales are fun too but suffer when compared to their predessessors.

Lysette Anthony is …..she cracks me up….I can only think of her character in “Husbands and Wives” . I can’t tell if she is joking or not but she is very over the top.

Now we just need Trilogy of Terror 3. I’m trying to think of a contemporary actress who can play three different characters. I’ll get back.

Man… the first time I saw this was late at night, alone in a dark house… I had no clue what I was watching. I caught the end of the one right before it (about a haunted car?) and didn’t even realize it was supposed to be horror… so Bobby caught me totally off guard… and then that ending! Man! That one really did keep me awake till dawn.
It was a long time before I was able to figure out what I’d seen…