If you want me to go to church, build a church in honor of Ray Harryhausen; that is a church I will have no qualms going to. I’ll even put coins instead of buttons in the collection basket when it comes my way. Besides being a true artistic genius (geez, the guy’s drawings are as jaw-dropping as his miniatures), he has inspired so many people to dream bigger than they would have without his shining example. In the documentary RAY HARRYHAUSEN: SPECIAL EFFECTS TITAN (now available on Blu-ray from the fine folks at ARROW), you’ll get to see the likes of STEVEN SPIELBERG, PETER JACKSON, TIM BURTON, JOHN LANDIS, JOE DANTE, JAMES CAMERON, GUILLERMO del TORO, TERRY GILLIAM and lifelong pal RAY BRADBURY sing his praises and thank him for his inspiration. I don’t have to tell ya, that’s quite the fan squad to have in one’s corner and although I’m not one to glorify financial success over artistry, it’s pretty amazing to see how the ripple effect of HARRYHAUSEN’s brilliance went on to spur the most successful filmmakers of all time. Recently a beautiful gold statue was made to honor HARRYHAUSEN and that makes me happy but is life-size big enough? I think it should be a couple miles taller.

My first run in with HARRYHAUSEN came thanks to a Sunday afternoon showing of JASON AND THE ARGONAUTS and it immediately stopped me in my channel switching tracks. The scene featured a dude in a skirt fending off a gang of animated skeletons and it witch-zapped me into a state of mesmerized awe. The only thing I ever saw that was more astonishing was that one time when I was a kid and I woke up in the middle of the night to see a bottle of Elmer’s glue dancing a mad jig on my dresser and that was probably (I hope and pray) a half-awake hallucination.

Not long after that I would get to witness HARRYHAUSEN’s sorcery on the big screen via his swan song before retirement, 1981’s CLASH OF THE TITANS. I’ll never forget that we got to the theater early and the show before us had not ended yet so every time the theater door would open to let out an usher or unruly kid, I’d get to see a momentary glimpse of CLASH’s giant Kraken-coated climax. As filled with anticipation as that left me, nothing could have prepared me for the signature scene involving the slithery showdown with a glowing–eyed, rattlesnake-tailed, Medusa. That sequence takes the cake because it’s as thrilling as it is chilling and it’s got kindertrauma written all over it. Also, can I add that I’m sorta team Medusa? She was just hanging out in her pad and wasn’t asking for any trouble. Then again, I’m also team Calibos and he definitely was up to no good and I forgive him because he had an awesome bone throne, a stylish swamp lair and chummed around with a giant vulture. It’s possible I’m not the best judge of character.

Anyway, this is exactly where I’m NOT going to trash CGI and cry about how computers ruined everything while writing on a computer. I mean what’s the point? I have a feeling people and their eyeballs have changed more than movie effects have. Wasn’t there a time when the viewer met the filmmakers half way and used their own imagination a little? These days folks seem to be much better at pointing out holes than patching them up and yep, that extends to just about everything. All I know is that checking out HARRYHAUSEN’s glorious work always brings me back to a less persnickety mindset and a sweet space where I’m so stunned I can be knocked over with a Pegasus feather. It’s like you’re looking at the exact spot where diligent skill, virtuoso talent and uncanny alchemy meet. HARRYHAUSEN himself hits the nail on the head within the documentary when he points out the dream-like quality his artistry achieves. I don’t think it’s anything that can ever be duplicated but if you want to be inspired by it, well then, the sky is truly the limit.

NOTE: Folks, check out more ARROW FILMS awesomeness HERE, share your own HARRYHAUSEN memories in the comments and since it’s Funhouse Friday let’s say we do a CLASH OF THE TITANS puzzle below! There are ten differences between these two images; can you pretend those differences are Pokemon creatures of some sort and find them all?!!

1- A Pegasus looking up. B looking down.
2- B snakes in Medusa’s hair above the Princess have mouths wide opened. A snake directly above Princess head has closed mouth.
3- B Pegasus has longer feathers than on A.
4- B Pegasus left forelimb is longer than A.
5- B Perseus has longer cape than in A.
6- B Perseus has shorter boot on his right leg than A.
7- B Princess dress in the back is slightly longer than A.
8- A Princess hair is almost touching her back. B Princess hair further away.
9- A pic, look above Princess head and you’ll see a crag and a single star. Pic B crag is larger and is blocking that star.
10—————————————- It’s gotta be somewhere!

Good job Chainman! I think you missed the gold clasp thing holding up Perseus’ cape. That was a hard one! 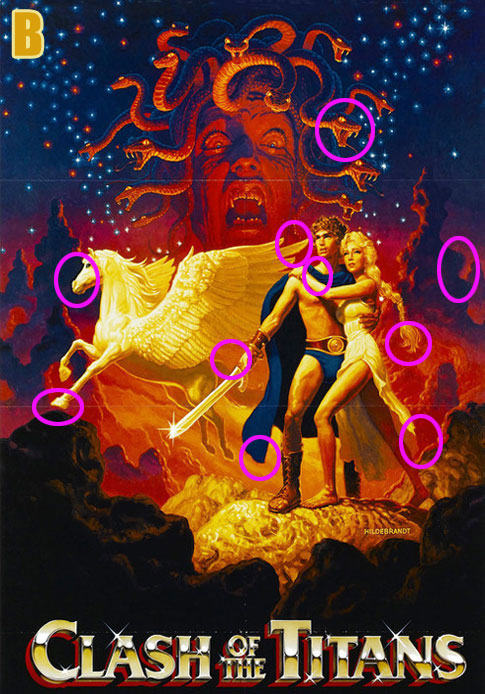 Yep, I missed the gold clasp on Perseus’ cape.

Ray Harryhausen said something missed by most of today’s audiences who are so used to CGI-everything. When an effect looks too realistic, it loses it’s fantastical qualities. It is the otherworldly look of his stop-motion technique that lends an air of fantasy to the effect.

I have said the same thing about video games. As they become more and more realistic they tend to have a real wow factor that quickly degenerates into stale boredom. It was the beautiful and fantastical look of early classics that made them so visually engrossing and infused the game with a sense of escapism into another world. Add to that, the need for fantastic gameplay to make up for graphical limitations and the games had it all: ethereal visuals and addictive gameplay. The SNES / Genesis / DOS / Saturn was the golden age of video games because the leap to 3D hadn’t really begun and developers lacked the excuse of cloaking tepid gameplay in fancy visuals.

Harryhausens’s monsters did more than move they lived