I wish a space alien would ask me what I think is mankind’s greatest achievement because my answer would the 1983 made for T.V. slasher mystery DEADLY LESSONS! I remember how excited I was the night this aired and why shouldn’t I have been? It’s like THE FACTS OF LIFE GO TO HELL and it stars my favorite person who ever lived, DIANE FRANKLIN of AMITYVILLE 2: THE POSSESSION and SUMMER GIRL fame! Actually, as far as the cast goes what we have here is an embarrassment of riches: ALLY SHEEDY, NANCY CARTWRIGHT, BILL PAXTON, DONNA REED, LARRY WILCOX & DENNA “cousin April” FREEMAN all collect paychecks! Read a fuller fawn-y review HERE!

Next up is THE DEMON MURDER CASE, another T.V. movie that left a strong impression on me. Its description of the devil scared the living crap out of me when I first saw it and little did I know that within the year I’d be moving into the town where the story it’s based on took place (although TDMC is set in Rhode Island rather than Brookfield, Connecticut). This is yet another case that Ed and Lorraine Warren were heavily involved in and it stars Philadelphia native and FRIDAY THE !3TH star KEVIN BACON! Read more about this traumatizing title HERE!

Why am I lumping these two movies together besides the fact that I think they both rule? As it turns out, THE DEMON MURDER CASE aired on March 6th 1983 and DEADLY BLESSINGS aired the very next day March 7th! What possessed me not to remember that? Maybe it’s because there was so much awesome going on in 1983 that back to back viewing satisfaction wasn’t a unique enough occurance to stand out. For more 1983 goodness, check out our 1983 Funhouse flashback puzzle HERE!

Yay! I watched Deadly Lessons on YouTube a few weeks ago. I remember watching it when it first aired as well. I loved it then, and I still do! It is a great murder mystery! I had a crush on Larry Wilcox as a kid instead of Erik Estrada , so I remember being thrilled that he was in the movie.

Well, Mickster, that’s perfectly understandable as we men of the Wilcox clan are generally thought of as irresistible to women…(pops his gum like Burt Reynolds)

DIANE FRANKLIN of BETTER OFF DEAD and BILL AND TED’S EXCELLENT ADVENTURE fame!

-Fixed that for ya’.

i don’t see these on Netflix streaming?

Sorry- I should have been more clear about that. These two are only on Youtube. I know that kind of makes the “Streaming” in the title not make sense. The bad news is the picture quality is not great but the good news is our readers who don’t get Netfliz can watch it too!

Here’s something I found that I thought was interesting…It looks like a German video store poster for Deadly Lessons as “High School Killer”. 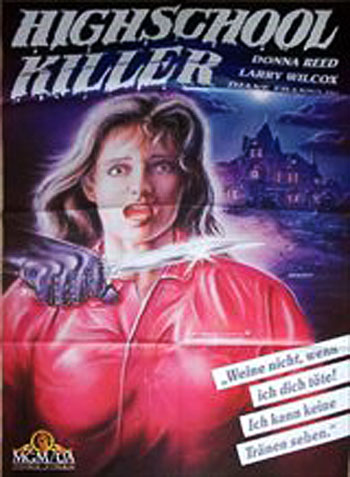 Oh. My. God. Nostalgia overload! Where did you get that TV Guide with the closeup?

I just found your blog and love it! I am definitely adding you to my blogroll.

Diana
The Queen of Scream
TheQueenOfScream.com