Now I get it! DON’T OPEN THE DOOR is on my list of films I always fish for on YouTube and always fail to catch. Then the other night, there it was just staring me in the face like it was there all along claiming to have been posted more than a year ago. How is that possible? Turns out I have been searching for it with the year 1975 attached while the YouTube video says 1974. I guess that’s why it never got stuck in my net. Well, IMDb agrees with ‘74, I have no idea where I got ‘75 from and to make matters muddier the actual film sports ‘79 in its opening credits. Are we talking when it was made or when it was released? I’m confused enough to stop pretending that I have any concept of time in the first place. The important thing is that I got to see this movie again! DON’T OPEN THE DOOR was directed by the always interesting independent filmmaker S.F. BROWNRIGG whose first film DON’T LOOK IN THE BASEMENT (1973) haunted late night airwaves throughout my youth. I had seen DOOR once before on VHS and although the entire film hadn’t rocked my world, I was wowed by its climax which took place in a lighthouse-like crow’s nest cupola complete with colored glass windows. It stuck in my head.

But how did I forget the film’s opening credits? How? It consists of an assortment of creepy dolls standing in a black void and it is the swellest thing ever. Maybe I blocked it out because I wasn’t cool enough to appreciate the awesomeness yet. That must be it. Oh geez, I wasn’t ready for any of this movie back then! That was before I realized that the best plot in the world concerns a young lady returning to her childhood home where she once witnessed a parent being murdered. Why are movies ever about anything else? It also doesn’t hurt that our main lady (SUSAN BRACKEN) acts like a cross between NAOMI WATTS in MULHOLLAND DRIVE and a petulant LINDA BLAIR or that the entire film looks like the grooviest candy-coated art flick that CINDY SHERMAN forgot to make. I’m probably not the best person to speak on the subject of feminism because my favorite Spice Girl is Baby Spice (I know Sporty has better pipes but did she attempt an awesome ode to Carol Anne from POLTERGEIST?), but somebody really should write a term paper about how every menacing man in this movie tries to get our heroine to bend to their will only to get a full blast of her nuclear ire instead. Sure, madness is her only reward and that’s the same resigning towel THE YELLOW WALLPAPER threw in.

What on Earth am I talking about? I should say that there is a legitimate swampy ten minutes of redundancy that you have to drag yourself through to get to the glorious denouement but don’t cry during that part, just use that opportunity to make yourself a tuna fish sandwich. Put pickles on it, that’s what I did. If your refrigerator does not offer pickles, push it out the door and buy a new one.

omg i remember seeing this a few years ago and man i freaking loved that train they live in in the beginning!!! i’m gonna have to check it out again cause i dont remember much other than that!

it’s funny cause i just came across another S.F. Browning movie last night on youtube – Keep My Grave Open (1976) – and man i really got sucked into it immed! there’s really something about that guy’s movies.

Carol! I thought you’d like this one. I even told John it was a “perfect Carol movie”! That train thing at the beginning is awesome and I love the mansion and how the movie looks overall. One of the things I like about this guy’s movies is that even though the plots are out there they still take place in a grounded world. I think the limited budget is a plus with these and he’s just really good at capturing the creepiness. Don’t Look in the Basement is such a cool movie too.

By the way, somebody on Imdb was able to track down the mansion in DOTR…If I win the lottery I’m booking a room.

!!! if I ever make a movie I am stealing the idea of shoving a random title card into the film like this: 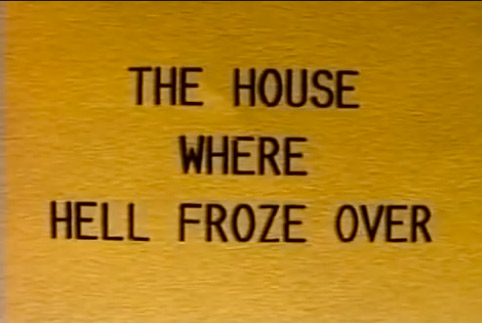 Man, so many movies can’t come up with one good title but this flick has TWO excellent titles! I can’t decide which I prefer.

i dont know if i’d go so far as to call Keep My Grave Open incredible – but i did really like it a lot! there’s a whole lotta down time though. and not much real action. but man the feel of it is what got me. the whole time i kept thinking that it was the EXACT type of movie that would have come on some random afternoon when i was a kid and im sure it would have scared the crap out of me cause ive always been a pretty big weenie.

i’m touched that my name would get bandied about in relation to Don’t Open the Door over at the castle there!

the main reason i watched it in the first place is cause the description is really similar to a still-unnamed-name-that-trauma of mine where the whole shebang culminates with a man killer who was dressed as a woman all along. but alas – i still haven’t found my trauma-inducing transvestite killer movie.

it’s maddening though cause it has the same sneaking up on someone in bed scene as both Unhinged and Dont Open the Door. but the one i remember seems to me like it was late 60s/early to mid 70s and there’s a scene where the woman sits down in front of a mirror that is surrounded by lightbulbs and pulls her wig off and that’s when you know it’s a man (or when I did – I’m sure there were more sophisticated watchers back then that already knew) – there’s actually a similar scene in The Comeback that got me all geeked out too but that’s not it either. it seems to me like it’s set in a huge mansion that also was once a theater – but i could be mixing a couple movies up. i have no idea.

Could it be The Flash and Blood Show there is an old theatre and a mansion in it and I think a reveal similar to what you describe I cant remember for sure.

thanks cherock88! i looked at all the trailers on youtube and man it really seems similar. even the part where they’re all staying in the theater cause what i remembered was that this person invited a bunch of people to this mansion and killed them off. some of it seems different though – but i saw it on tv so it was prob pretty cut – plus, like i said, i could be blending a couple movies together in my head.

i’m getting a copy of it so i’ll watch it soon and find out!

Boy, I really hate to be that guy that nitpicks , but being that you misspelled his name twice and he is from my state of Texas, I must correct you.The name is S.F. Brownrigg, not Browning.Other than that, a great review for an underrated film and director.Thanks!

I fixed it in the review.

I looked up the spelling on Imdb and I STILL got it wrong.

This is QuaRtermas all over again! 🙂