Today is the day for ENCOUNTER WITH THE UNKNOWN. I have no excuse for not watching this regional anthology sooner as it has been creeping around these pages for some time. Our buddy Crafty Pants Carol included it in her “It’s a Horror to Know You” and “Creepy Lady Faces” posts and it has been the sought after answer in Name That Trauma’s from as far back as Bigwig’s in 2010 and as recent as Steve Q’s from earlier this week. What was I waiting for, a written invitation? And so watch it I did and now here I am all in your face pressuring you to follow suit…

Narrated by the legendary ROD SERLING, this TWILIGHT ZONE inspired grab-bag of supernatural yarns is admittedly tame by standards of both today and yesteryear though that doesn’t necessarily curb its ability to offer a few chills. Anyone who grew up in the seventies is likely to get at least a nostalgic buzz from the film’s overall eerie vibe. I myself felt right at home with this flick or more specifically, right at home in my backyard, in a tent, at the age of twelve, holding a flashlight in my shaky hand. In other words you could probably knit this together with faves THE LEGEND OF BOGGY CREEK and SCREAMS OF A WINTER NIGHT into one big five hour long scarf of a movie and I doubt anyone would notice the seams.

Oh sure, its flawed up the wazoo, it shamelessly pads its running time by showing the same scenes over and over again but you’re either charmed by such things or you wouldn’t be watching it in the first place. I believe the movie’s persistence in showing up time and again around these parts is proof enough of its effectiveness. It may be shoddy and makeshift but there’s something spooky enough going on here to make it sticky. Maybe its pure nostalgia, I could almost hear the theme to “IN SEARCH OF…” while I watched and that’s good enough for me. You won’t believe any of these “true stories” but you’ll be reminded of when you might have.

ENCOUNTER was directed by HARRY THOMASON who has several semi-forgotten Arkansas –set drive-in spookers under his belt (REVENGE OF BIGFOOT, SO SAD ABOUT GLORIA, THE DAY IT CAME TO EARTH) and remarkably went on to great television success as a producer, director and writer (THE FALL GUY, DESIGNING WOMEN, and not so much with EMERIL) and a prolific partnership with his wife LINDA BLOODWORTH THOMASON. Believe it or not, 20 years after the release of ENCOUNTER, THOMASON would be all kinds of chummy with the President of the United States Bill Clinton and even testifying on his behalf before the Grand Jury during the Lewinsky scandal. Who’da thunk?

I love how the first story ends up being a messy layer cake of multiple levels of narrative, all recursing on itself. You have the unnamed narrator reading the crawl about the “Rankin cluster” graveyard phenomenon, which we assume is the context for the appearance of the funeral scene (Level 1).

But then Rod Serling comes in with his own narration setting the funeral as a specific, real event that occurred in the past… (Level 2).

Okay, so Rod Serling is telling us a story of a specific funeral in a graveyard that is part of the “Rankin cluster”… but wait! We next discover the funeral is actually a memory being relived by the boy on the plane (Level 3), who then proceeds to relay the story to the priest (Level 4)… within which there is a FLASHBACK to the prank that preceded the funeral (Level 5).

Then back in the “present” (I think?… back on Level 3?) the plane crashes, and afterword the priest retells the entire story, including the boy’s
telling of it to him on the plane, to his fellow priest (Level 6?)

And then just when you think you’ve climbed out from under this dogpile of narrative levels, Rod Serling comes back in to remind you the whole thing is still just a story HE’S telling to the audience.

man this movie scared the CRAP out of me when i was a kid – esp the freaky lady pictured above and the thing in the hole that makes the one dude go insane. what the hell was down there??!!?!?! but then when i watched it as an adult i almost fell asleep during the olde timey ghost girl story (although i absolutely loved the 70s lovers in the field of flowers scene!!).

it never ceases to amaze me the silly things that freak our shit out when we are kids.

I found this little revelation on IMDB, at least adding a little clarity as to the intent:

The pretense of the plot was that the hole was the gates to Hell. At least that is what I was told on the set. I was the voice of the boy in “the hole”. The sound for that was actually done @ Century studios in Dallas. Brian Hooper and myself spent a day doing sound effects and voice tapes. The sound from the actual hole was me in the bottom of a concrete cistern calling “Lady” over and over. Was a very good movie, being able to work with Harry Thomason and meeting Rod Sterling was a great thrill for me as an eleven year old kid. Brian Hooper was almost my step father, and still remains a great friend. He bought me my first car when I turned 16. He is now retired and living in East Texas on a farm. My mother was a script girl on this gig, she was credited at the end Jackie Barnes and I was uncredited, Brian was who got us involved, an got my Mom her start in the industry. I just got a DVD copy and I am watching it as we speak. I haven’t seen this in over twenty years. My 15 minutes.

-Why didn’t I ever get any of these cool jobs as a kid?

Haha, too true. It’s all over the place. All I keep thinking about that first story is why didn’t the mom curse the lady who SHOT HER SON? I think that prank the boys pulled was pretty harmless. How were they supposed to know that old lady had an itchy trigger finger? Also, If she just cursed the gun lady all those poor innocents in the airplane would have lived.

Yea, I started nodding off a bit when they started repeating the scenes at the end. But I like the ghost girl story because its such a familiar campfire tale- quaint as it is. I can just tell that this is exactly the type of flick that would freak me out as a kid. That rural setting goes a long way.

Ah!That makes sense. I like to believe that hole in the ground is the same hole that is featured in THE PIT (1981). Unofficial prequel!

Turns out EWTU is on DVD as a double feature with “Where Time Began” but the cheapest used copy is 99$ so – I think Youtube is the way to go with this one. I wish I could find “REVENGE OF BIGFOOT”, it has the coolest poster art… 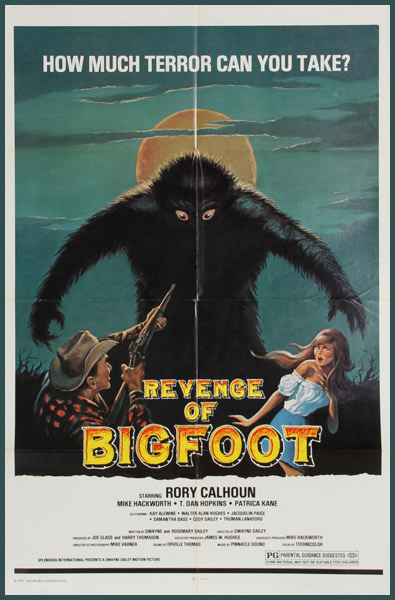 That is sweet.
It looks like a MAD Magazine back cover “fold-in”, after you folded it in!