Can you conjure up the 10 differences in these two THE CONJURING posters?

Oh yes! Today is the day! THE CONJURING is THE movie I’ve been dying to see! I know it’s not very professional (haha!) or kosher to judge up a movie before you’ve even seen it but let me tell you, a movie that has VERA frickin’ FARMIGA and PATRICK hells yeah WILSON portraying ghost hunters ED & LORRAINE WARREN would have to be pretty God awful for me not to love it like a hurricane. By existing alone, this movie has already won half of my heart. If the trailer is any indication, what with its nightmarish take on THE CLAPPER, the other half of my heart will soon follow. Wow, they even got LILI TAYLOR on board! And it’s from the director of INSIDIOUS (and some other stuff!) and there is apparently a creepy doll in it! What else could you ask for? This is true leaving your house and paying too much for a ticket material! Sold.

And man, I really miss VERA! Even though it may have veered in weird directions that it often abandoned, I loved BATES HOTEL to the umpteenth degree based mostly on FARMIGA alone. In fact, it kinda ruined other shows for me. I couldn’t even finish HANNIBAL due to its fussy, overbearing nihilism and when I tried to jump back into TRUE BLOOD , it seemed like the line between it and TWILIGHT was less distinct than I remembered. (Although I have to say BATES MOTEL certainly didn’t ruin ORANGE IS THE NEW BLACK for me, that show is goooood and I’m still all about AMERICAN HORROR STORY.) Am I setting myself up for disappointment? Nah! My trusty spectre detecter is telling me this one’s most likely a safe bet!

1. The release date
2. The left chimney is longer
3. The ghost shadow is missing a foot
4. An extra column on the second story of the house
5. The case files of the Warrens: true or not true??
6. A bit of the rope missing from the noose
7. Some of the big exposed root is missing by the tree
8. The long branch sticking out of the top of the tree is different lengths

That’s all I’ve got!

I’m going to see The Conjuring tonight, probably alone because no friends I’ve mentioned it to seem into seeing it.

I’m 100% with you on Bates Motel and Hannibal…I can’t deny that Hannibal is a high quality show, but it’s just no fun for me to watch at all. Bates Motel is much better as escapism.

Btw, welcome back! Can you tell how anxious I’ve been for a new Funhouse?

I am very interested to hear your thoughts. We can’t go see it until the middle of next week and I’m so mad. I’m DYING to see The Conjuring!

Oh! There’s an extra pillar thing on the balcony.

I’m psyched about the conjuring too. Hopefully ill wind up seeing it alone in an empty theater like Insidious and Woman in Black.

Taylor!!!! YAY!!! Great job as usual Taylor and glad to see you back too!

I missed the funhouse most of all! I know it doesn’t always get a big response but it’s just fun to do and I always assume that there are just millions and millions of people playing who just don’t comment! Because I’m delusional.

Glad you agree about Hannibal. I feel guilty that I abandoned it. It was so good at the beginning (that mushroom murder episode especially) and so beautiful to look at… But man did it get bogged down by its own pretentiousness. Gillian Anderson couldn’t even save it for me and that’s saying something. It was pretty though. Maybe I should have watched it with the sound down. I did get some decorating tips.

And then I watched the season premiere of TRUE BLOOD and cried uncle.

If you have Netflix Streaming, I’m really enjoying that ORANGE IS THE NEW BLACK show. It’s not horror but it’s the next best thing…women in prison!

I told John I might be able to wait till Sunday to see THE CONJURING with him but I cannot fulfill that promise. Even though it’s Tatooine level hot out there and the sun is specifically trying to kill me personally…I know that like a zombie when the time comes I will begin inching my way to the theater.

It’s going to be like NEAR DARK with all my clothes smoking and turning into ash when I get to the theater but I gotta do what I gotta do.

I mean Farmiga is one thing and Wilson is another but both together?! Playing the Warrens?! It’s too good. My pupils are already beginning to transform into cartoon hearts. And I hear if the movie does well (and it will) it’s gong to be a series! That is genus.

And Carol I’m with you on seeing stuff alone. It’s so much easier to get lost in the movie that way. Can’t wait.

Also counting my chickens by assuming that Wilson and Farmiga tear up the screen in this one, a series of movies following them, re-creating cases that the Warrens have been involved in, would be fantastic. As long as they’re better than the A Haunting in Connecticut: Ghosts of [A State That’s Not Connecticut] series.

Haha, Why did they do that? That hurt my head. They couldn’t just call it “A Haunting in Georgia”? Was that title already taken or something? Way to shoot your own foot off! One day I will watch that Ghosts of Georgia thing because Starbuck is in it but that day will be when it’s free and I’m especially desperate and nothing else is on and there’s no light for reading.

Unk, they probably should have just skipped all of the hullabaloo and gone ahead and made it free in theaters. At least they could have bragged about high attendance…Hell, I might have even gone!

“A Haunting In Connecticut: Ghosts of Georgia…Now playing in IMAX FREE-D!”

The Conjuring was goooood. I left work early when I saw that there was a showing I could make it to in time.

I won’t say anything more (except: keep your eyes peeled for the real Lorraine Warren at one point).

I agree whole heartedly! I loved it just as I was predestined to. It’s scary and it’s damn beautiful too at the end (The beach photo). And they did a great job with the time period. I love when the seventies are represented as not so kitschy. Farmiga and Wilson are awesome together and WOW the Lily Taylor brought it. I’ll write more about it latert. Just if anyone thinks they might want to see it, THEY ARE RIGHT.

In fact, I’m getting back so late because I hung out in the theater and watched it a second time! I know I have a problem. This means I owe the price of one ticket to Vera Farmiga but I’m only going to pay it back if she submits a kindertrauma!

Oh and I saw Lorraine! I loved how they did the closing credits and what a score! 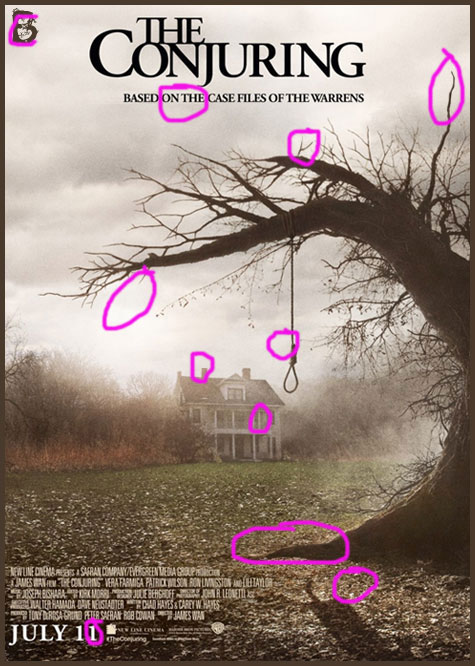