With a remake of FRIDAY THE 13TH just around the corner, I think it’s time we take a look at the role kids have played in the Crystal Lake saga. Their significance has not been entirely consistent throughout the series, but their presence on several occasions created formidable and lasting waves…

FRIDAY THE 13TH
Aw look it’s little Jason whose imagined drowning death sparked more than a decade’s long bloodbath! Flashback scenes reveal two omnipresent qualities in the young man, first of all he had a face only a mother could love and secondly he’s no MARK SPITZ! Less you think he was just a tragic victim, he pops up at film’s end to involve himself in one of the greatest most startling shocker finales in the history of horror!

FRIDAY THE 13TH: PART 2
Remember this kid? PART 2 begins with him jumping around in puddles and just barely missing being jumped on himself by a now grown, adult Jason Voorhees. No kid likes to have to come in when called by mom but this guy should be very thankful he did. If Jason has taught us one thing it is to always heed your mother!

FRIDAY THE 13TH PART4: THE FINAL CHAPTER
Tommy Jarvis (COREY FELDMAN) stands supreme as the ultimate FRIDAY child; not only did he accomplish what so many had tried and failed to do by ending Jason’s mortal life, but he also had quite a talent for suspiciously SAVINI-esque make-up effects. Voyeuristic tendencies aside, this Crystal Lake critter is a true hero!

FRIDAY THE 13TH PART 5: A NEW BEGINNING
When DIFF’RENT STROKES’ “Dudley” shows up, trouble is not far behind. Having narrowly avoided the cruel fate of being a bicycle shop owner’s bride, poor Dudley (SHAVAR ROSS here as “Reggie”) now has to face off against Señor Voorhees. Why so serious Dudster? That’s not Jason, it’s just a bonkers ambulance driver avenging the death of his son who was a recent casualty of a violent candy bar dispute!

FRIDAY THE 13TH PART 6: JASON LIVES
You don’t have to be Benjamin Franklin to know that lightening has the power to reanimate the dead. In this installment Jason comes back to life only to find that, for the first time ever, Camp Crystal Lake is crawling with kiddie campers! This little girl is named Nancy and she is plagued by bad dreams in what must be a baiting nod to competing franchise A NIGHTMARE ON ELM STREET!

FRIDAY THE 13TH PART 7: THE NEW BLOOD
Little Tina here is a pint sized Carrie White sans the oppressive Catholic upbringing. With her awesome psychic powers she smashes her beloved daddy beneath a dock but don’t worry, he’ll show up again years later and not looking any worse for the wear!

FRIDAY THE 13TH PART 8: JASON TAKES MANHATTAN
We’ve gone full circle and the little Jason that drowned in the lake is kicking his way back into our universe via blurry flashbacks again! This time he’s looking less mongo-licious than we remember, but then that’s nothing compared to how stupid adult Jason looks later when he takes off his mask. This unloved addition to our story is not without its bright spots, but ultimately I must quote the GREEN ACRES theme song “Keep Manhattan, just give me that countryside!”

So you see, kids really did play a large part in the FRIDAY franchise even if they sat out the 3-D one and declined traveling with Jason into hell and outer space. In fact, a conversation between two children supplies my favorite line in the entire series. In PART 6 JASON LIVES, two little boys are shown hiding under a bed and awaiting what appears to be their inevitable doom at the hands of Jason. One boy turns to the other and deadpans “So, what WERE you going to be when you grew up?”

Great piece! Tommy Jarvis was kick ass as a kid, even if he grew up to be the dumb ass that reanimated Jason.

Wonder if there will be any kid-Jason in the remake?

Unkle, your line about Dudley narrowly avoiding becoming the bicycle shop owner’s bride literally gave me one of the best laughs I’ve had in a long time!!  Thanks a bunch!

I’ve always wondered whether or not Jason would kill a kid. Tommy got to take him down before we found out in that one, othewise I don’t think (besides P. 6) he was around them much. I always wondered if he’d have sympathy for a kid, seeing as how he’s really just a screwed up 5 year old in a gian’t person’s body.

I know, I think too much.

Update: Shavar Ross wrote on his Facebook “wall” that he’s currently in Santa Monica recording some commentary for the re-release of the Friday the 13th P. 5 DVD.

Finally the lil’ brats will get their due.

I’d love to imagine a world where a Friday The 13th picture would be completely inhabited by children who suddenly get their sleeping bags hacked, wacked and tossed against trees by Mr. Jason.  Forget the counselors, the kids didn’t help him either when he drowned.

great list…  i never realized reggie = dudley.  how stupid am i?

also, let’s not forget when water forces jason to regress to his child form in freddy vs. jason, giving young jason yet another new look.

for those interested, here’s the young jason in the remake…
http://www.slashfilm.com/2008/05/15/young-jason-voorhees-revealed/

Thanks Corey! I totally forgot that lil’ Jason appeared in FVJ! Here’s a shot of what he looked like in that one… 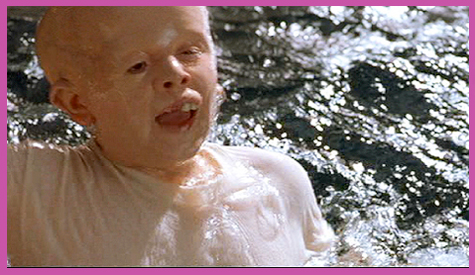