Which is Creepier: Her maniacal laughter or this ominous overdub?

Why does the overdub version remind me of Jaws? WHY?

And is it just me or does the rocking chair bring to mind that great scene from Deathdream?

I think the regular commercial is scarier than the overdub version. All Baby Laugh-A-Lot needs is a knife to slice you with as she laughs and laughs.

One of those things where a $10,000 prize could be offered up for the “Best Overdub” contest, but the original would still win out as the scariest.

All I’ve got to say is that I’ve never been terrified by an “action figure”. 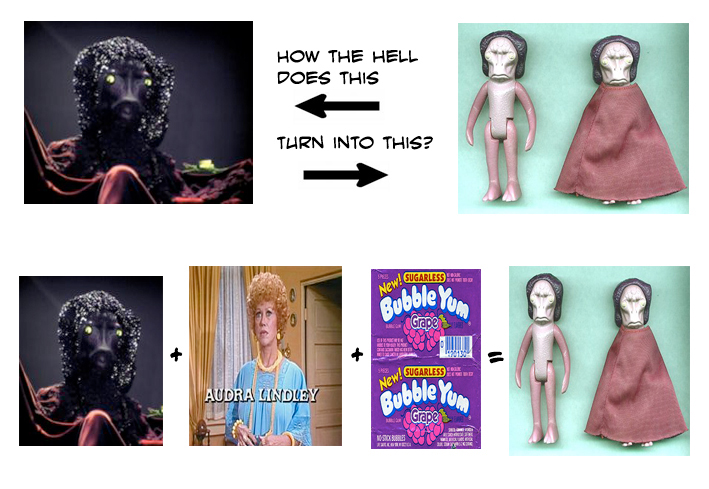 You got me!  I had seen it, but forgot about it.  I stand corrected.

I had also forgotten about “Action Man” with the Eagle Eyes:

We keep a picture of one of these guys up in our office to ward off the walking dead.

I thought the embedded video was the tarted-up one for a while.  It’s seriously creepy all by itself.  I especially loved the shocked little girls’ WTF faces before they began the guffaws…obviously infected by that poisonous, evil toy’s giggles.

Action man is alarming for sure but is he more frightening than Buck Roger’s Ardala?…. 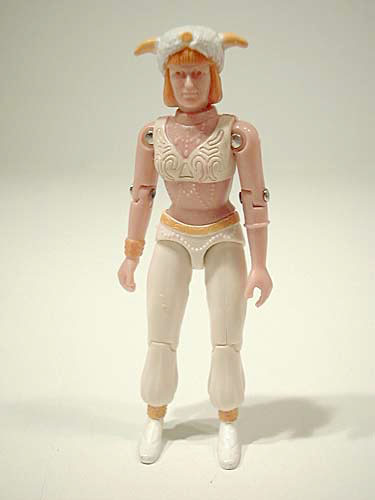 Yikes!  She (?) looks like Amy Madigan’s “McCoy” from Streets of Fire!

Either that or Courney Love with no makeup.

And what’s with the ritual scarification on her torso?

Prof,
The best part is…this is what she is supposed to look like….

But just imagine if they made a Henry Silva action figure….did they?  Just seeing the real guy makes me want to crap my pants, no matter what he’s in.  He always looks like you insulted his daughter and he put a hit out on your family.

And yes, baby laugh a-lot will be the last thing I see on my death bed.

Sbd,
They did make a Silva/Kane action figure but they toned down his murder face! 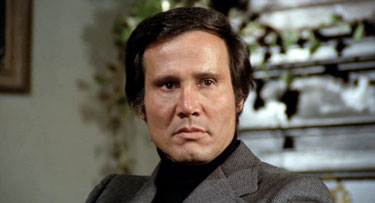 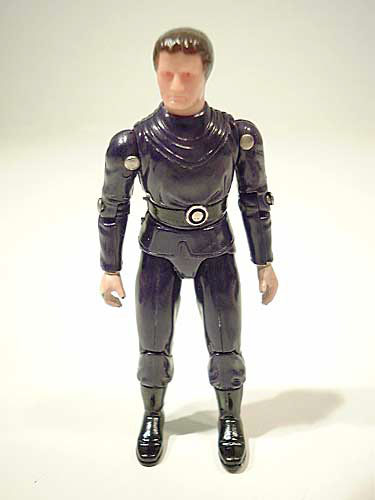 It reminds me of the “zombies” in EVIL DEAD. Those were the only zombies to ever scare me. Most zombies are really quite (except for the occasional low-key “Braaaaaains!”) and amble slowly and quietly but in EVIL DEAD they would be all herky-jerky, bangin’ around the room and laughing maniacally. Even when Ash would somehow get them into the basement he’d hear them cackling wildly and taunting him. Then Bruce Campbell would just scream “Will You Shut The Fuck Up So I Can THINK?????” (or something along those lines).

As the mother of a baby that had the Furby and other talking dolls I can tell you there is nothing creepier than being in the hosue alone and one of those things accidentally going off and scaring the Hell out of you. Baby laughs A Lot probably caused more premature strokes than cigerettes and deep fried food combined!

I was JUST LOOKING at Henry Silva’s profile in IMDB minutes ago…  Eeeeeerie.

But –If I had to go up against Baby Laugh-A-Lot, I’d bring Silva along to stare her down.

I just noticed something: Henry looks like Chevy Chase – if he’d spent the last 30 years in prison…