Thought I’d share another trauma with you guys, seeing as how I feel much better about spilling my guts about The Blob remake (Haha not really…I don’t think that one’s going away any time soon).

Anyway, this one is kind of odd, and I was reminded of it today because it’s been snowing like a son of a bitch here.

Back when I was much younger and people used to go to video stores to rent VHS tapes, I would always be drawn to two things when I would visit my local rental place; the box art of the horror movies, and the posters that would be hanging up for new releases near the entrance. One day I went with my father to rent a couple movies, and the poster hanging up was for a movie by the name of Fargo. It depicted a lonely snow-covered road, a car turned upside-down over on the side, with what appeared to be a dead body in snow gear nearby leaking blood onto the snow, and appeared to be headless because of the angle. The tagline: A lot can happen in the middle of nowhere.

This poster frightened the crap out of me. What COULD have possibly happened to that poor person out in the snow all alone? For some reason, my mind went to “abominable snow man.” I was sure that unfortunate driver stumbled upon a wilderness road, came across a yeti, which flipped the car over and dragged the man out, brutally decapitating him and leaving his bloody body behind. I actually would stay up at night thinking about that poster and what the movie could have been about, giving myself nightmares in the process.

I didn’t actually see the movie until I was 20, about 13 years later (yeesh, I’m getting old…), and while it couldn’t possibly live up to my childhood imagination-induced nightmares, I still found it really enjoyable. A good mix of humor and thriller, I thought. Still kinda wish it had been about yeti attacks, though.

I love this traumafession. You have a great imagination and now i wish there was at least one Yeti in Fargo too.

I actually have a Fargo snow globe on my desk! Sadly the water has evaporated out of it completely but I still love it.

They sure did a great job advertising that movie.

Unk, we COULD always pretend that Peter Storemare is one in disguise. At least we have that.

A Fargo snow globe? That’s the coolest! Please tell me it has a mini Steve Buscemi going through the wood chipper, and when you shake it up little red snowflakes are mixed in with the white!

You know, the film DOES feature a giant Paul Bunyan statue – will we see it go on a rampage in Fargo 2: Lumberjack Attack? Only time will tell.

I used to have that same Fargo snowglobe! It came in a gift pack with the widescreen VHS. And yes, shweeshee, it did have a woodchipper with Buscemi’s foot sticking out of it, and red flakes along with the snow.

The “body that looks headless because of the angle” aspect of this reminds me of the traumafession I sent in years ago re: the read-along storybook of Raiders of the Lost Ark with a shot of Indy that made him look headless (even though he was clearly alive and in action mode, but what did I know, I was about four years old).

Ah! There’s two models of the snow globe! I only have the non-shredder one! 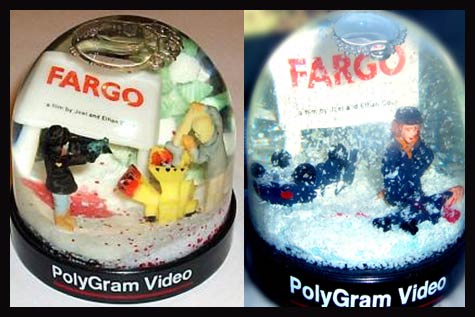 Chuckles–Hopefully they could do a better job with Paul Bunyan than they did in Axe Giant: The Wrath of Paul Bunyan. Not even Joe Estevez could save that stinker.