For as long as I can remember I’ve had a fear of wolves. I grew up in suburban Southern California, so there’s no chance it was inspired by any real life encounters, but I do specifically remember two storybooks, with illustrations that inspired my nightmares for years. One of the books unfortunately had no cover so I don’t know what the exact name was, only that it was a collection of fairy tales and stories probably published in the mid-to-late ‘70s. The story that especially frightened me was the WOLF AND THE SEVEN KIDS. For those not familiar, it’s the story of seven goat kids, who are left alone while their mother goes shopping. A wolf arrives at the door and tries several ways to convince the kids to let him in. After he succeeds and eats six of the seven kids, the mother returns, cuts the kids out of the sleeping wolf’s stomach, and then fills his stomach with large stones. He wakes up and heads to the well for a drink, where he falls in and drowns. I remember vividly that the wolf was black and had scary eyes with purple eyelids. Like I said, I have no idea what the book was called but if I ever come across the story in a used bookstore, I’ll know it instantly by the illustrations.

The second book isn’t hard to find at all. Barnes and Noble reprinted it several years ago and it has been in print ever since. It’s called THE AESOP FOR CHILDREN with pictures by Milo Winter. Looks like the original was published in 1919, and the extremely old fashioned look of the illustrations certainly made it all the creepier for me. Coincidentally the story that scared me the most is the one called “THE WOLF AND THE KID.” Even more than the story just flipping open to the page it was on was enough to freak me out because of the illustration (see above). Here’s the text:

There was once a little Kid whose growing horns made him think he was a grown-up Billy Goat and able to take care of himself. So one evening when the flock started home from the pasture and his mother called, the Kid paid no heed and kept right on nibbling the tender grass. A little later when he lifted his head, the flock was gone.

He was all alone. The sun was sinking. Long shadows came creeeping over the ground. A chilly little wind came creeping with them making scary noises in the grass. The Kid shivered as he thought of the terrible Wolf. Then he started wildly over the field, bleating for his mother. But not halfway, near a clump of trees, there was the Wolf!

The Kid knew there was little hope for him.

“Please Mr. Wolf,” he said trembling. “I know you are going to eat me. But first please pipe me a tune, for I want to dance and be merry as long as I can.”

The Wolf liked the idea of a little music before eating, so he struck up a merry tune and the Kid leaped and frisked gaily.

Meanwhile, the flock was moving slowly homeward. In the still eveing air the Wolf’s piping carried far. The Shepherd Dogs pricked up their ears. They recognized the song the Wolf sings before a feast and in a moment they were racing back to the pasture. The Wolf’s song ended suddenly and as he ran, with the Dogs at his heels, he called himself a fool for turning piper to please a Kid, when he should have stuck to his butcher’s trade.

Years later when I found this book for sale, I was surprised because while the illustrations still had the overall feeling I remember, I realized that many of the details I that had scared me as a kid must have been imagined. I could have sworn that the wolf in the picture was looking directly at me, whereas now he seems to be focused more on the goat. The fact that the wolf was green scared me, almost like his fur was so dirty it had fungus growing in it or something. He was also winking, (at me no doubt) as if to say “You’re next.” I could just imagine the devilish tune he must be playing on that flute, and the line about the Dogs recognizing “the song the Wolf sings before a feast” still sends shivers down my spine. It makes me think of kids in rural villages all throughout history hearing a strange flute song being played in the distance and their mothers saying something like, “You see? Don’t stay out after dark or the Wolf will get you too!” And what’s with the jaunty little handkerchief?! Wolves on their hind legs wearing clothing are obviously evil.

Part of what makes the Aesop book so frightening is the realism with which the animals are rendered, and there are plenty of other wolf illustrations in it. But for some reason this one was the one that really got to me. Many of my wolf nightmare featured a green wolf standing on his hind legs and wearing a handkerchief around his neck. Fortunately I don’t remember any flute playing.

UNK SEZ: Eric, I may be able to point you in the right direction to track down that first book. THE WOLF AND THE SEVEN KIDS is a story by the Brothers Grimm (you can check out the ending of an animated version HERE). I suggest checking ebay to find the proper edition you are looking for. Let us know if you find it! As for everyone else, be sure to take a peek at Eric’s blog The Ol’ Sketchbook.

That picture above is beautiful. If I had a large format print of it, I’d hang it on a wall. I’ve never heard the name Milo Winter before, but I’m sure I’ve read books he’s illustrated. Simply stunning compared to most children’s books these days where they only use simple shapes and primary colors.

Here is the full image… 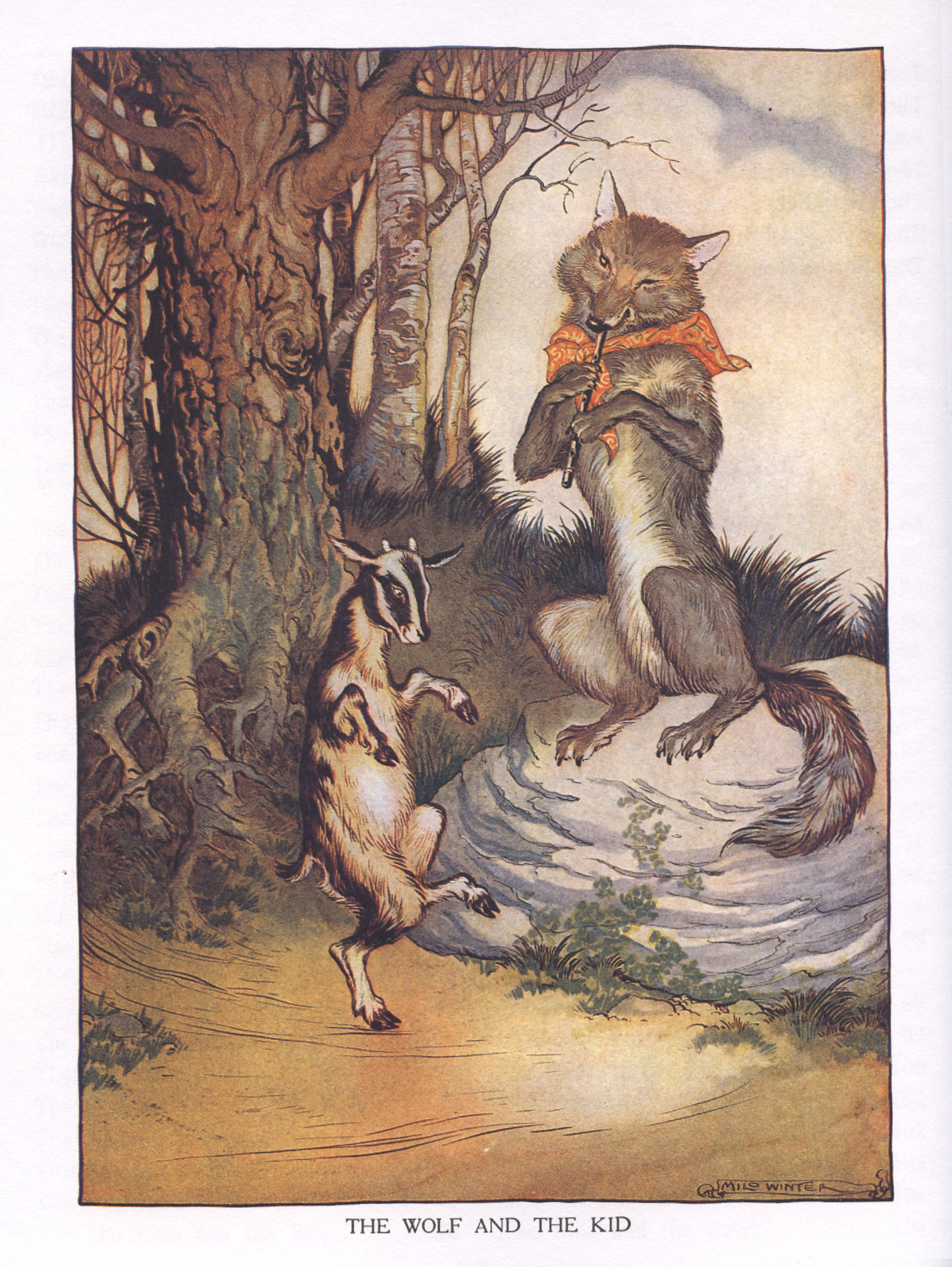 Heh, I was always the opposite. I felt wolves were unfairly marked as the bad guys or stupid monsters, and even as a kid I knew it wasn’t true. I never really understood why people were afraid of wolves, or dogs for that matter.
Then again I have this intense hatred/fear of dolls. Hate hate HATE those things. Nothing should ever look that life-like and never blink.

Fear’s such a funny thing.

Prof., I am pretty sure I bought a copy of Aesop’s Fables illustrated by Milo Winter at the end of the school year. I will check my room at school on Tuesday and bring it home for you to enjoy.

Im with PHANTOM WEREWOLF on this one.
Canines – Good.
Dolls – Evil.

My husbands cousins from England visited this week and brought my daughter a 4 foot tall rag doll. Now you would think because its a rag doll and not one of those oh-so-real-looking dolls like MY TWINN or AMERICAN GIRL or (pee pee chills) a porcelin doll I would be okay with it…but something about the fact that the doll is FOUR FEET TALL fills my heart with dread! Dolls just shouldn’t BE that big! Look at the fight “Chucky” had in him, and he was only TWO feet tall. If this thing attacks I dont stand a chance!

Mama…. kill it. Kill it with fire! Kill it till it dies!