Not much scares me, and for the most part horror movies have always made me feel normal. My mother didn’t much like me watching them when I was young (elementary age) so I would go over to my friends’ places and get my fill of stuff like THE SHINING, IT, Freddy Krueger, whatever. When I was about 7 or 8 I was bragging to my mother (who was a child psychologist) how “fun” horror movies were. She turned on the TV (we had an old console T.V. and no VCR- this was in the early ‘90s) and said something like “We’ll see how brave you are.” (Something like that). The movie she was about to show me was the 1978 masterpiece INVASION OF THE BODY SNATCHERS.

She knew I believed in aliens and I started out brave, but as the film continued and I kept seeing people “changing” into blank automatons and chasing, screaming, after the “real” people my little kid bravado turned sour and I began to seriously clam up. By the end of the movie I was breathing heavy, a combination of the movie and what my mother was doing- as I watched she became more and more emotionless until at the end, she turned to me, my sister and my friend and said in a blank, dead tone (to me). “You look frightened. Are you frightened?”

Still being at an age where reality and fantasy overlapped, I was frightened, but as she progressed with her little “experiment” the message of the movie (that anyone you know can “change” overnight, but still “look” like the person you love) began to take root. When I finally admitted I was “a bit” frightened she turned on me, shot her finger at me and screamed like a body snatcher!

My sister and friend were hardly phased, but I ran upstairs and began looking for any plant in my room I could toss. When my friend’s mom came to pick her up, my mother convinced the other mom to pull the same body snatcher scream on me (except the other mom had the good sense to stop after I began hyperventilating). My mother kept this up for days, and at school I became more and more emotionless, polite and robotic until they finally dragged me to the counselor’s office (I was convinced she was “one of them” too).

For months I lived honestly believing that the body snatchers were taking over and that it would only be a matter of time before everyone was taken over, so for months I acted robotic, but at night I had night terrors (the beginning of a lifelong sleep disorder). The movie alone, at that age, would have terrified me, but Mommy made the movie real.

I can watch all of the BODY SNATCHERS movies now (I haven’t seen the ‘50s version but the ‘78, ‘93 and ’07 versions) and I do okay, but I still get the urge, to this day, to act robotic and stiff upon viewing these films… just in case.

UNK SEZ: Wow Lex, this has got to be one of my favorite traumafessions of all time (about one of my favorite movies too!). Thank you so much for sending it in. I’m not sure that I would recommend your mother’s services as a child psychologist, but I feel a certain affinity with her sick sense of humor. More than anything though, I’m impressed with your vivid imagination.

Speaking of which, I really dig the painting that you sent in to accompany your traumafession…

Folks, can you believe how awesomely kindertraumatic Lex’s artwork is? We’re going to try to get Lex to share some more of her paintings with us in the future, but in the meantime if any of you are interested in contacting Lex about her work, she can be reached at insatiablexphile@yahoo.ca. If you are looking for somebody to illustrate something horror related, I think this is your gal! Thanks for sharing your talent with us Lex, very impressive!!!

Uhm, that’s psychological torture and quite frankly your mother sounds scarier than anything on this web site.

Your mother is awesome. She reminds me of my mother who, after getting word that I had gotten the nerve to try the “Bloody Mary! Bloody Mary! Bloody Mary!” trick in the mirror of a darkened bathroom, hid behind the shower curtain.
She screamed like a banshee after I completed the last “Bloody Mary” and I almost knocked myself out running into the closed door.

Not much scares me but the first time I saw that movie and heard that blood-curdling scream at the end I almost shit my pants.

definately one of my Top 10 Horror Moments

Holy shit! What a Tramafession! Yeah, your mom was kinda f’ed up to do that, wasn’t she? Dig the paintings. A lot. can’t wait to see more.

For me the scariest thing in the movie was Donald Sutherland’s perm….

Admin
unkle lancifer
Don’t forget Queen of the meltdown Veronica Cartwright’s reaction to Sutherland’s howl. Anybody can scream but the way she shakes her head in disbelief is brilliant. You can basically witness her mind shattering…
Big time spoiler alert…
0

Oh my God, your mom sounds like she comes from my family! Everyone does this kind of stuff to the younger ones in the family and it’s hilarious! I would make such a bad mother, I’m taking notes and plotting on how to torture my own offspring like this.

My mom is on a similar level of awesomeness when it comes to horror movies, she always let me watch the goriest, scariest, tense movies. We watched Candyman and she made me go into the bathroom and say it five times, she shut off the lights and I screamed and almost tripped trying to get out. I remember being about 7 and watching the original Halloween with her and my uncle, and Scream was one of the first movies I can ever remember watching.

Ah, the late 70’s!  The period where I got most of my childhood scares!  This was a movie of firsts for me: It was the first movie that I saw that had scary moments.  Asides from that scream there was Normal Donald smashing the skull of his Pod dupe, the dog with a man’s face,  Brooke  Adams crumbling in Donald’s arms and then seeing Leonard Nimoy as the bad guy.  Mr. Spock the bad guy!  Yep, these images were burned in my mind.  I think Donald’s scream at the end is why I find Roger Waters’s scream in the live version of “Careful With that Axe, Eugene” from Pink Floyd’s “Ummagumma” to be unsettling!  Oh, this movie was also my first exposure to a topless female c/o Brooke.  I’m sure my mother who took 11 year old me was a bit uncomfortable in the theater when Brooke’s topless scene went on!  Oh, my mother also did a “we’ll see how brave you are” test on me when I watched “The Day of the Dolphin”.  No scares in that but it has an ending NOT for those with separation anxiety!

This reminds me of when I watched “Of Unknown Origin” (aka the Peter Weller vs. the giant rat movie) with my dad. I went upstairs to get a drink at one point, and when I came back down he jumped out and grabbed my knees from just about a giant-rat level. I was pretty much inconsolable for the rest of the movie, but he found it pretty funny.
PS the ’78 Body Snatchers totally rules. One of my all time favourite horror flicks. The dog with the human face (accompanied by Jerry Garcia’s crazy banjo music) is one of the funniest/scariest images my imagination can conjure.

Hi guys, its me, Lex! Um, Unk, I am a chick, not a guy (Lex is short for Alexandra- I started calling myself Lex after seeing Jurassic Park because I had a lot in common with girl-Lex from JP). Anyway, its hard for me to upload photos of my work- that was one of my very first paintings ever (not counting stuff I did in kinergarten). I told Unk I’d paint something for someone for free if they are writing a horror novel or working on a movie or need horror related art- the only thing is, because I am very poor, I can’t pay to ship big things. Besides that, I’ll take care of the expense of paint, board and the painting itself! I love my horror brethren and it gets my name out there! HORROR FOREVER!

Oh, I haven’t painted in so long. I am planning to go out and get some charcoal and paints and boards and junk today or soon… anyboy got any requests? Or should I just get drunk or high and let my little unconscious mind go nuts?

I had a nightmare about Mengele the other day, attaching animal parts onto twins. Twins are creepy anyway (I am a fraternal twin, no offense intended)! LOVE TO MY HORROR BROTHERS AND SISTERS! Lex

P.S. In case you guys haven’t thought of this, or haven’t seen Rob Zombie’s Halloween.. well, Daeg Faerch is an awesome young actor! He’ll write you back, very nice kid, very down to earth! (man, I love canadian beer…. :D)

Admin
unkle lancifer
Zoinks!
Lex, I changed all the “he’s” to “she’s” and “guy” to “gal” in your post.
Aunt John said Lex could be a girl’s name and I didn’t believe him.
(maybe because his name is Aunt John)
P.S
Right there with you on the Canadian beer.
0

Wow Lex, I can’t decide if your mother is incredibly awesome or criminally evil, lol. If my mom had done this to me they’d still be scraping me off the ceiling.

Here is some more of Lex’s work! 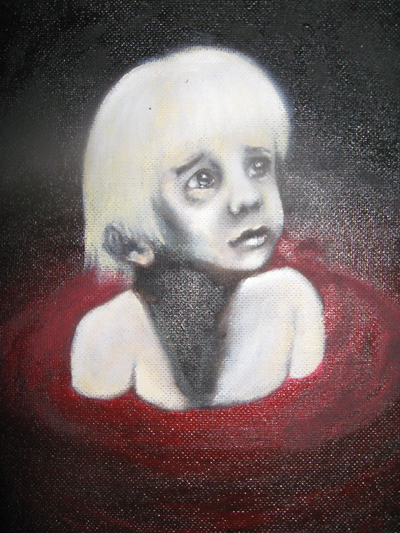 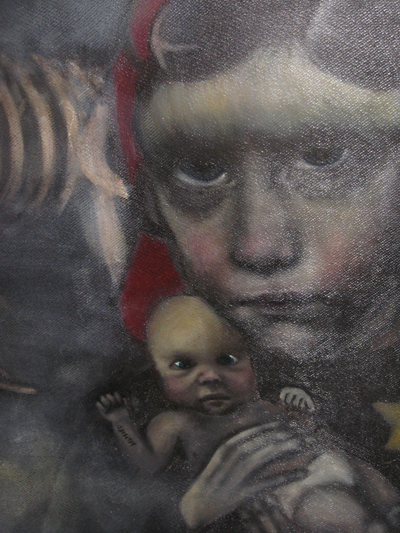 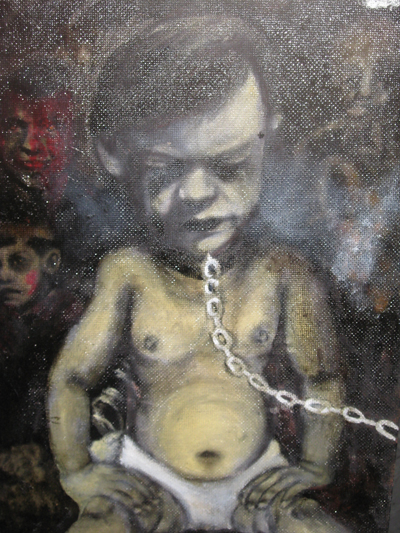 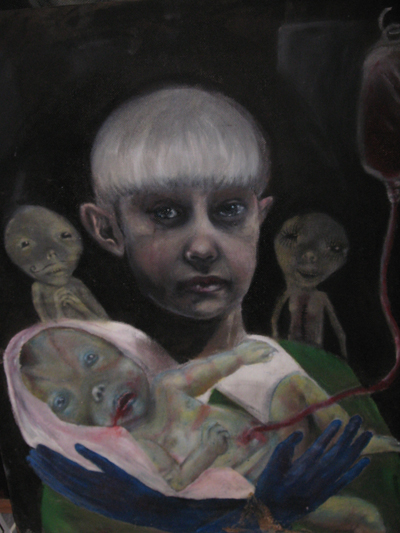 Lex, please take this as the huge compliment I mean it to be, but I could not be alone in a house with one of your paintings. Even if it was in a different room. Wrapped up. In the back of a closet. I would keep imagining the eyes in your paintings staring at me through the walls. 🙂

Aside from the high creepy factor, the skill and unique imagery of your work is superb and oddly beautiful.

Oh yes, the movie “Body Snatchers,” very chilling. My dad once got scared because I put on a facial mask (like a cucumber one, popular in 80s, dries clear and peels) and he came in to say goodnight and I had it on my face and he REALLY got scared because he had no idea what it was and I appeared to be a pod person.

Awesome trumafession Lex…my mother was too chicken to watch these types of movies, much less traumatize me…thank God.

Beautifully eerie paintings as well…I think we now have our resident artist here.

Haven’t been here for a while. Got drunk and phoned up my mom and apparently the scary stuff from my childhood that I remember, she has no clue about. Uhhh… yeah. Okay. So I’m apparently psychotic.