CREEPSHOW 2 is not nearly as accomplished as its predecessor. In fact, comparatively speaking, it’s a tad half-assed. Where as the original boasted five stories inhabited by some of the greatest character actors in the biz, its sequel slims down to a mere three journeys into the macabre and offers GEORGE KENNEDY and DARYL HANNAH’s ginger-sib PAGE. TOM SAVINI is still on board, but drops special make-up effect duties in order to host the proceedings as “The Creep,” a troll faced fiend who delivers comics to put upon children. Even the animation that bonds the anthology together takes a slide backwards to resemble Saturday morning public service type filler. Lesser sequels and sophomore slumps are par for the course in horror, yet if you remove CREEPSHOW 2 from the shadow of the original it not only works fine, but also offers at least one segment that flirts with classic status.

The first story in the troika is a traditional moral revenge fantasy where a group of young, vain delinquents get what’s coming to them thanks to an animated cigar store Indian. It’s not a barn burner but the vengeful wooden golem looks remarkably swell and there is a undeniable satisfaction in witnessing the gruesome deaths of anyone so disrespectful as to bully, torment and eventually kill lovable old timers GEORGE KENNEDY and DOROTHY LAMOUR.

The third and final tale is an equally gratifying, yet business as usual E.C. comics-vibed comeuppance piece where originality scores low and schadenfreude scores high. LOIS CHILES (BROADCAST NEWS) plays Annie Lansing, a kept, well-to-do gigolo patron on her way home from another paid tryst that accidentally runs over a homeless man on the side of the road. Tell-tale-heart style guilt for her self-serving indiscretions is represented in the form of the sometimes hilariously death-proof hit and run victim who refuses to take the slight lying down. Vehicular horror is a nice fit for any anthology (just ask 1983’s NIGHTMARES) and although this one steers dangerously close to repetitious, it eventually crashes into funny as hell.

CREEPSHOW 2‘s middle installment “The Raft,” based on one of the more grueling of STEPHEN KING’S short stories, is the film’s generally undisputed high water mark. Here four young adults find themselves trapped in the middle of a lake surrounded by a flesh eating, alarmingly cunning black sludge. Some low grade effects (Yikes! a giant floating Hefty bag!) and a limited running time do little to soften the hard to describe insidiously infectious over all effect. Like a body rotting nightmare “The Raft” makes great use of the sticky, can’t scrape it off contamination anxieties that engined both the classic THE BLOB and the more recent THE RUINS. A cursory scan of Imdb comment boards identify this one as a legitimate, albeit largely unheralded, kindertrauma contender. The premise and execution may not be 100 percent convincing, but neither matter as, for many viewers, it infiltrates the psyche like a bore worm regardless.

Due to its overall modest nature, it’s easy to forget that CREEPSHOW 2‘s pedigree is nothing to sneeze at. GEORGE ROMERO tackled the screenplay, based an assortment of STEPHEN KING tales, and hand picked his often cinematographer MICHAEL GORNICK (DAWN OF THE DEAD) for the directing chores. All in all, though, I doubt anyone involved had any illusions of surpassing the charms of the original film. These three stories, and the nearly useless animated wrap around tale, ultimately work better as a side dish to that more satisfying main course. The good news is that regardless of its also ran nature, it is never less than entertaining and at least in the case of “The Raft,” it provides something unexpectedly effective and memorable.

Great write-up, Unk — you pretty much said what I thought about CS2. And eerily enough, you put up stills of the three images that immediately pop into my head whenever I think of “The Raft.” That whole scene was a shocker.

And you’re right about the third tale’s descent into hilarity. My friends and I were cracking up in the theater for most of that segment. “Thanks for the ride, lady” became a catchphrase amongst us for the rest of the school year.

Ugh. I actually went to see this in the theater and knew, within seconds of the film starting, that I was going to be sorely dissipointed. Sure enough, it was a horrible experience. And made more infuriating that all of those horror legends were selling out their own name for the sake of a quick buck. And it’s crap like this flick that the horror genre gets so little respect… they just can’t leave their classics (instant or otherwise) alone.

“The Raft” is definitely the creamy filling here, and worth seeing, but imo the other stories don’t pull enough weight to support the whole flick. I rewatched the original recently and I think I know one of pt. 2’s problems–the lack of variety. This one has 3 stories, and the first had 5 (plus the wrap-around, unless I’m miscounting)–so that even if one of them wasn’t to your taste, it wasn’t long before you had something else to look at. I think 2 could have benefited from more (shorter) stories.

And should have saved “The Raft” for the end. Send ’em out on that one, they might forget being bored before.

Author
unkle lancifer
Vicar, I think they should have saved “The Raft” for the end too. In fact I think they should make a whole movie out of it. The first time I ever read it was in Twilight Zone magazine many moons ago. I love how it explains nothing and just relies on the survival aspect. The movie Creepshow2 does get an extra point for adding the “NO swimming” punch line at the end. 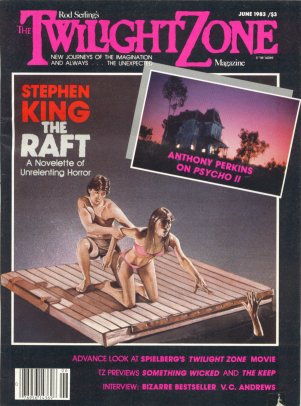 Every time I see old clips of The Cult’s Ian Astbury, I think of Old Chief Woodenhead.

Every time I get out of a car driven by a female, I have to fight the urge to say “Thanks for the ride, lady!”

Every time I see a floating platform on a still pond…you know….  I haven’t gone swimming in a pond or river in a long time.

Nice review! Creepshow is a classic in our household, and I remember being sorely disappointed by the sequel. (Though my little brother was kind of traumatized by the “Thanks for the ride, lady!” guy, which I mercilessly used to my advantage.)

Even so, I have to admit that the deaths in The Raft were disturbing, well-done and almost exactly mirrored what I had in my head after reading the story in Skeleton Crew. (Yeah, I was totally reading Stephen King  in grade school… probably explains a lot about me…) XD

I have nothing but love for Kindertrauma and the work you do, Unk… but your piece here (very well-written, of course!) is polishing a turd.  Creepshow 2 was one of the greatest cinematic disappointments of my life.  I appreciate the photos from the Raft segment, but I still hate that Goddamn movie.

Creepshow, like the finest of the EC stories it lovingly paid tribute to, was unsettling and disgusting and THEN funny.  (WHAT’S THE MATTER MISTER PRAAAAT?  BUUUUGS GOT YOUR TONGUE?)  The only part of Creepshow 2 that I appreciated when I saw it was the THANKSFORTHERIDELADY!!! part, and that was just a big joke.  A very disgusting and entertaining joke, true, but totally lame when compared to even the worst of the 5 stories of the first movie (Jordy Verrill, I suppose).

The stinginess of having 3 stories vs. 5 has already been addressed.  What most galled me was that only 2 of the 3 stories in Creepshow 2 were homages to EC comics – while the Raft was somewhat disturbing, and probably was the best of the 3 – all I could think of at the time was that I had read that short story and it had nothing to do with an EC-type story.  One of those things was not like the other, and it didn’t belong.

Just thinking about sitting in that movie theater and realizing that the hitchhiker story was going to be the last one of the movie makes me angry now.

I still love the site, though!

Author
unkle lancifer
There is no love for creepshow2!
Blue seven, I admit it I am a bit of a turd polisher but what can I say, I really do love “The Raft”! I guess my point was nothing can compare to the first Creepshow but if you watch this one without comparing it to it’s superior predecessor it’s not all bad. I’m glad you still like the site but be warned your UNk really does have questionable taste. (just check my ipod!)
0

Okay, the first CREEPSHOW is a classic, but I still have some love for part 2.  The first story always makes me think of Hank Williams’ Kawliga, which was later covered by Musical Traumatizers and Canacorn favorite, The Residents. I wholeheartedly agree that The Raft is by far the best segment…It was a favorite King short story of mine growing up and I was stoked to find out it was in the movie.  Oh, nice touch throwing in one of my favorite scenes from Flash…kudos, as the kids say.  Do kids say kudos? I also have fond memories of The Hitchhiker as well since “Thanks for the ride, lady,” became a catch phrase around my house just like many of the other intelligent KT readers.

Oh, speaking of guys getting mangled by those crazy women drivers, did youse guys happen to catch STUCK? The Wife and I LOVED it!

@Mr. C.: I so have a thing for Caucasians in corn-rows (JARED LETO‘s unfortunate hair really made PANIC ROOM for me). I will so be checking out the STUCK when it comes ON DEMAND from my cable… which should be soon, if it’s not already there.

Oooh, me too Auntie…I feel a blog post coming on!

I still haven’t seen Creepshow 2, and I’m a glutton for punishment, so I’m keeping it on the list! 🙂

Love this review – as I always do. You guys are the best pick me up online!

Damn it, Unk – you’re always a step ahead of me! I was just thinking of doing a Creepshow 2 blog but once again you’ve gotten there first! Then again, my favorite segment is The Hitchhiker so maybe there’s room for more Creepshow 2 love. I had no patience for this movie when it first came out but it’s grown on me since then. It’s still a junk pile of a movie but it has it’s own charm. By the way, I second Mr. C’s recommendation of Stuck – it’s one of my recent faves!

I will be, judging from the above comments, that saying “thanks for the ride, lady” to me at night when I’m leaving somewhere will ensure a skittish drive home.

Now that zombie from the first Creepshow who wanted his damn cake from Bedelia, I thought would be the death of me by heart attack at age 8.

The other two segments weren’t bad (especially “thanks for the ride, lady!”), but the winner here is “The Raft”. Another gem which elevated King in my youthful mind at the time.