ONCE
I wasn’t sure I wanted to catch DON’T GO IN THE HOUSE. When I was around 13, my best friend was taken to see it by his father and the tale he returned with rattled me. I was immersed in horror films at the time but DON’T, at least as my friend described it, sounded like it was on the deeper end of the pool than I was familiar with. It was about a guy who lived in a house (that you’d better not go into), who captured women, tied them up in a metal room and then burned them alive with a flamethrower. What?! Why would anyone want to do that?! Listening to my pal’s war story was thrilling but worrisome. He talked as if he was lucky to make it out of the theater alive himself. The movie he made in my head was close enough. DON’T didn’t sound like much fun and being tied up and burned alive sounded way crueler than a nice quick axe to the head. I wasn’t ready to go into this particular house. I wasn’t even all that tempted…yet.

THEN
A bunch of years passed and I (wrongly) believed I had exhausted every 1980s horror flick I could. Obviously it was high time I took the plunge and went inside that darned house my friend had told me about. Even if the film did not live up to my nervous expectations, I’d have a decent time visiting the dark shadow it once cast in my head. I ended up appreciating the movie a lot more than I expected. I found the depravity I bargained for and the lead actor was sympathetic enough to carry me through. I suppose there is a misogynistic element skulking about but such is the price you pay for free range horror. I missed DON’T in its heyday and I missed it in its awkward years too. By this point it captured a specific valued bubble of time. Friendly disco music and a weirdly effective undercurrent of melancholy balanced out whatever sleazy behavior it indulged in. The house itself is my favorite type of authentic location you only seem to find in low budget films. The awesome icing on the cake is DGITH’s awkward dubbing. The original soundtrack was unusable so everything had to be re-dubbed later which adds something as off-putting as it is endearing. Background characters jabber hilariously and incidental dialogue jumps to the forefront. It’s wrong but I love it.

NOW
Watching the film a second time I find myself even more taken. The psycho killer with mommy issues routine is nothing rare but the unscalable wall of alienation maniac Donny Kohler bangs up against is not limited to his history or home. He’s harangued at work, his competency is perpetually up for debate and every time he tries to connect with a lone ally, some snide comment questioning his sexuality is made. Donny’s abusive past (his mother tried to burn the sin out of him) would be enough to unhinge anyone but the consistent debasement he receives in the ugly universe he inhabits is just as destructive. (Okay maybe he shouldn’t have thrown that lit candle holder at that pushy girl’s head at the disco but it’s not as if he wasn’t perfectly clear about not wanting to dance.) In the end Donny’s last victim is not a woman but a priest who has failed him and there’s an epilogue that suggests that the evil we’ve witnessed is not limited to Donny’s twisted mind. In the messed up world of DGOTH it seems every kid we encounter from extras on the street to the children of Donny’s friend are victims of hostility and the voices that haunted Donny are ready to “help” them (“the weak and the wounded” to borrow from SESSION 9) too. Sure, the “evil finds a new host” epilogue may be cliché but it strikes a truth about the fallout of abuse.

DON’T ends up being my favorite type of movie. It can be seen as crude and humorous on one level but on the other hand there’s something hard to shake creepy about it too. The old house, with its bizarre angles and funky furniture and the sudden flashes of Donny’s white-haired, blue-skinned, scarecrow of a dead mother give it some timeless gothic flavor while the music, fashion and unrepentant violence speak specifically of its own era. I also really like the performance of the main actor DAN GRIMALDI. I think he’s really interesting in this and I’m not surprised he went on to other things including playing twins on THE SOPRANOS. I can’t really say this movie ends up being as scary and as effective as the movie that my pal constructed in my head long ago but it does have a better soundtrack and I have a feeling it’s only just begun to speak to me.

The house itself always seemed like another character in the movie. I’m guessing it was a metaphor for his decaying, fractured psyche?

Apocapolypse, I always think if a house is featured prominently in a horror movie that it is a map of the character’s head!

Such a great house and I think it’s in NJ. Wonder if it still stands and I can go visit…

Here is a stand out scene that I must share…

When I read the title I can’t help but think Don’t “Go” in the House. Tagline: “You urinated in the neighbor’s house. Now he’s really PISSED OFF!”

I was surprised by how much I liked House. I held off for years because I worried it was going to be ultra-misogynistic and mean spirited. I finally gave in (although I don’t recall why), and I thought it was a lot like Maniac – which I adore. It’s interesting you bring up the theme of isolation because that’s a connector to this film, Maniac and Christmas Evil. For some reason that movie popped up in my head while reading your review.

I love crazy east coast 80s horror. They did it right!

Amanda, I agree, DON’T is the perfect companion for MANIAC. I read on Imdb that an Italian bootleg title for it is “Maniac 2: Non andare in casa”. The French title is “Pyromaniac”!

And yes the sense of isolation and bleakness is really strong. It also made me think of CANNIBAL MAN (1973) which I think we’ll cover here soon.

It’s ironic that some read these movies as thin and exploitive because to me they come across as deeper & more character driven than some of the more widely embraced horror titles of that time period.

Lol @ goo, that title would actually be a reality show about my house and the pups within… 😉 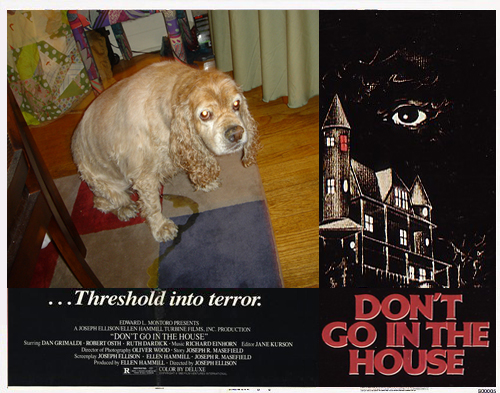 I forgot to mention DON’T’s original shooting title was THE BURNING!

Roaring with laughter, thanks Unk! I was having a real shit day, but that right there turned it around 🙂

PS That’s the *exact* look the little butt clowns give after they’ve done just that.

WOW, guys. This was going to be my next Name That Trauma! I’m delighted to know what fucked up movie I now watched on Christmas Eve 1982, and I cannot wait to watch it again!

That poster’s tagline should be changed from “…Threshold into terror.” to “…Fresh load from the terrier.”

Boy, this movie really did have an “awkward period”. I remember it being panned bad on VHS, and it was the only one in my horror collection I got rid of as a kid because it had such a dark vibe I didn’t want it in my room anymore.But after revisiting it on DVD I’ve found it’s a really great little movie

Damn it Unk, get out of my head! First “Vigilante” now “Don’t Go In The House”, I watched these movies pretty much back to back quite recently. It seems from reading the comments on this that most people seem to treat this movie with the same caution that I did. From reading about it and watching the trailer it just seemed like it would be way too cruel and dark, it seemed like I was going to come out of it changed and damaged somehow. But after I finally took the plunge I found a really strong and effective movie. It certainly is from the nastier side of the tracks but as previously mentioned, like Maniac it’s extremely rewarding. Adding to dark dangerous feeling these movies evoke in me, is they were both on the Video Nasties banned movies list in the 80’s. Growing up as a horror fan back then they could only be found for extortionate prices in dodgy stores, that list really gave most of these movies (an undeserved in most cases) air of mystery and real terror. These two definitely lived up to that.

Two elements that make Don’t so interesting are the phased out voices that follow abused children and the disco scene which tries to force the viewer to feel sympathy for Donny. I was afraid to see this because of the misogyny, but it’s really a great film.