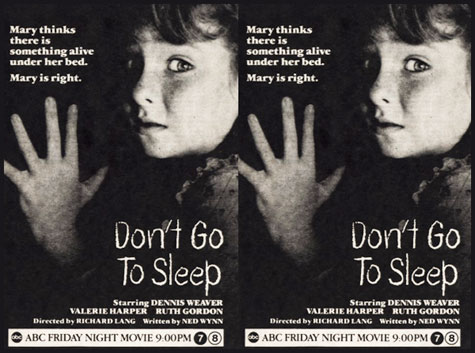 I recently posted in our comments section about how the 1982 television movie DON’T GO TO SLEEP is currently up and running on YouTube… but that’s just not enough! I have to urge you guys on our front page to try to check it out this weekend. You just never know when something like this will get pulled and you may not get another chance to see it again outside of expensive, unreliable bootlegs. This movie comes highly recommended not only by the two person staff of Kindertrauma, but also by the queen of T.V. movies herself, Amanda By Night of MADE FOR TV MAYHEM!

DON’T GO TO SLEEP stars VALERIE HARPER (NIGHT TERROR), DENNIS WEAVER (DUEL), RUTH GORDON (ROSEMARY’S BABY) and OLIVER ROBINS (of POLTERGEIST fame.) It’s the story of a little girl who comes back from the dead to convince her living sister to avenge her and it kind of rules on a zillion levels. It’s a classic television movie that lifts from the popular slasher films of its day and it’s pretty creepy, slightly campy and a must see for those who dig that sort of thing.

After you’ve seen it, use this post’s comments section as a forum to talk about it. If you are a fellow blogger, write a review and send us a link to it!

C’mon, it’s too hot to go out and see PREDATORS! The first part is posted below. Click on the YouTube logo on the bottom of the right corner and it will take you to the rest! If you’d like to recreate that long lost feeling of staying up late and watching good horror on T.V., I can’t think of a better way to start than with DON’T GO TO SLEEP. So come on kids, start not going to sleep now!

NOTE: Thanks to the awesome French blog VIDEOTOPSY for the archival TV GUIDE ad above and cool DR. GOREMAN for the press kit photo below. 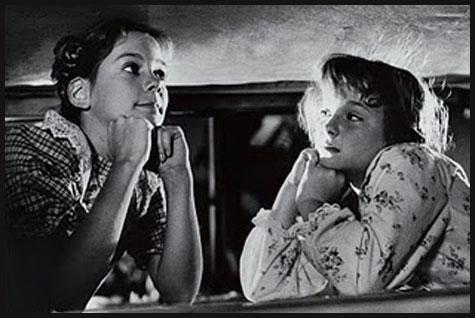 Awww, this is so cool! I’m glad it’s available like that on YouTube. It NEEDS to be seen!  I hope some people watch it and join in the discussion!

And thanks for the heads up and the linkage!

And I Love this review from Hysteria lives…

I watched this for the first time a couple of months ago… it’s good creepy stuff with some nice twists and turns.
I’m thankful for blogs like this one that point me in the direction of such overlooked treasure.

Cinemageddon has two rips (700mb and 1.08gb) for those who truly love this one.
Oh, and speaking of YouTube…those of you who have, erm, ‘enjoyed’ British PIFs like “Apaches” and “Dark and Lonely Water,” it pleases me to announce that BUILDING SITES BITE has been FOUND! And it is SICK and WRONG!!!

This is indeed a classic in that lost genre of “truly scary TV movies” from the 70’s (into the early 80’s). The ending of this one has stayed with me for nearly 30 years….thanks so much for posting!!

I watched this the other day and commented on the scary pizza cutter bit.  I’ve thought about it since then and it’s really interesting to me cause if you told someone there is a pizza cutter scene in a movie you’d probably get a lot of laughs cause it just sounds so silly.  But it wasn’t at all.  I mean the instrument is silly – but the way the girl cuts the pizza with it all crazy is just the beginning where you are all “eek – creepy!” and the way it digs in really hard into the banister and wall and then the frenzy of it cutting through the phone cord but still all detached from a human form – man – they really pulled that off!   And I’m not lying when I say that I momentarily put my hands over my face after the quiet knocking at the end – for I am a big weenie and I knew there was a scary face coming – but I reclaimed my dignity a bit and watched the ending – and that girl is pretty damn freaky!

By the way – I absolutely love Valerie Harper and Dennis Weaver was really good in that scene where he was drunk and talking to the grandma.  His eyes were pretty creepy and intense.  I was actually very impressed with this movie.

I would blog about it but I think my crafty fans may have been traumatized enough by my willy moments post!  My crafty blog might slowly be turning into a horror blog.  Ha!

That was so, so freaking amazing. Thanks, you guys.