Are there ever enough movies that take place in the snow? Nope. That’s why this list is happening and don’t be surprised if there’s a part 2 in the future!

If you are not sold by the name PATTY DUKE alone, I’m really disappointed in you but I’ll plow forward anyway. PATTY plays profoundly pregnant Francesca who goes to visit her deceased husband’s mother for the first time. Things don’t go well. The mother (ROSEMARY MURPHY) is sneaky and snidely and casually speaks of drowning non-pedigree kittens. She also tends to lie about everything, browbeats her sad mentally challenged daughter (SIAN BARBARA ALLEN of SCREAM PRETTY PEGGY) and is secretly harboring a psychopathic rapist (a very un-John Boy RICHARD THOMAS). This is a claustrophobic, tense psychological chiller cut from similar cloth as THE COLLECTOR, MISERY or DEAD OF WINTER. As far as atmosphere goes though, this one is in a class all by itself. Never has a snowy landscape appeared so relentlessly dismal and woeful. In fact, I think it’s filmed in suicide-o-vision and I mean that as a compliment. Strangely, five years after the movie was made, two very real (and unsolved) murders occurred in the oppressive mansion where it was filmed. Why am I not surprised?

Wait, it seems a lot of my unloved horror flicks tend to get lumped into the “thriller” category. The way I see it though if the crap that happens to the characters in these movies happened to me, I’d call it “horrible” rather than “thrilling” and so here we are. Anyway for about the first half hour of watching the snowy enough for this list BLOOD RELATIONS recently, I began to wonder, “Why the hell did I like this movie?” and then the entire flick nosedived into a surreal nightmare zone of depraved insanity and I had my answer. It was like when Cindy Brady was all, “Why do you always make me peanut butter and jelly sandwiches? And her mom Carol goes, “Because they’re your favorite” and Cindy goes, “Oh yeah, I forgot! I forgot that I’m playing the part of a character so dumb she can’t even remember what she likes to eat.” BLOOD RELATIONS cleverly tricks you into thinking it’s about cold, calculated family backstabbing and then it punches you in the face with the fact that it’s about cold, calculated involuntary brain operations. That’s cool isn’t it? It’s also got RAY WALSTON, is mildy pervy and was filmed in Canada.

Another pattern I see forming with these unloved flicks is that they tend to have forgettable titles. A COLD NIGHT’S DEATH? Is that trying to be Shakespearian or something? You don’t win friends with salad. If you’re like me, you love JOHN CARPENTER’S THE THING more than you love any of your friends or family but you always felt that one thing was missing from it and that thing is a monkey. There is no monkey in THE THING. It is verifiably monkey-less. A COLD NIGHT’S DEATH does indeed involve a monkey or two. On the other hand, never at any point during A COLD NIGHT’s DEATH does a person’s head fall off, sprout crab legs and do a jig under a desk so ultimately there’s not much of a competition. The good news is this made-for-television production does get right what CARPENTER’s film does, the sense of isolation and paranoia is truly palpable and it’s hard to get a firm grip on exactly what to fear. I’m not sure if that’s enough to make up for COLD’s shocking lack of scenes in which chests explode into teeth that chomp off arms but it’s something. How’s about ROBERT CULP as a compensation prize? He’s sort of the unsung king of winter horror considering his turns in SILENT NIGHT DEADLY NIGHT 3 and SANTA’s SLAY. Certainly he and monkeys combined are an adequate substitution for the mind-blowing artistry of ROB BOTTIN? I guess not but give this one a stab anyway.

Now this movie is truly underrated. See, there’s this psychiatrist (KATE GREENEHOUSE) who finds out she has a brain tumor. She goes to hang out in her cabin in the snowy woods and is surprised to find her little sister and husband already there and plenty of suspicious evidence that her unexpected arrival thwarted a tryst. Shocking as that may be, the night has much more drama to offer in the form of one of her disgruntled ex-patients showing up for one of those surprise home invasions that are so popular these days. This movie is unnerving. And the stakes are higher than most of its kind because the characters seem like real people and the danger feels like legitimate danger. It’s also a bit of a mind-screw so make sure you keep an eye on every fire lit detail. How this one keeps falling between the floorboards I’ll never know.

Don’t give me that look. I know there are far more obscure films needing a leg up than this one but I wouldn’t be me if I didn’t try to cram THE BOOGENS into every possible conversation I could. Everybody knows about THE BOOGENS but do they respect THE BOOGENS? Not as much as they should. People like to give this gem a hard time simply because it presents monsters that look like adorable turtles but c’mon, those shoddy shots only concern about two minutes of screen time! Hmmm, I feel like I ranted about this before. Did I already tell you how I read the movie tie-in novelization and I loved it and it had the same characters but in different situations and it concerned the entire town all leading to a climax together which reminded me of THE FOG? Or that in the book the monsters were so hideously described that I just picture them that way now when I watch the flick? Can you believe that I’m watching THE BOOGENS right now as I write this? It’s true. How can you beat that cabin in the snow? I’m not kidding when I say I think Trish and Mark (REBECCA BALDING & FRED McCARREN) are my favorite horror couple at this point. Oh and Tiger the dog, let’s not forget him! Or that Jessica (ANNE-MARIE MARTIN) was not only in PROM NIGHT & HALLOWEEN 2 but also once battled BUCK ROGERS with glowing-eyed psychic powers!!! The less we talk about Roger (JEFF HARLAN) being on MORK & MINDY the better on account of he tried to date rape Mindy in the pilot. I’m going to watch this movie every year for the rest of my life. I just want you to know that.

Here is a secret toy surprise inside!

Notice there is no “Sunday Streaming” today because I am so behind due to all the darn Christmas type of happenings.

But don’t fret!!! This post is a Sunday Streaming of it’s own!!!

Here is the hard to find A COLD NIGHT’s DEATH looking better than usual and in full- lucky you! I had to jump through hoops to see this one back in the day!

The excellent DARK HOURS is in parts here but if you have NETFLIX STREAMING it’s there too!!!!!

Here come my beloved BOOGENS- nice picture quality!!! I envy you if you watch this because it is a joy sandwich…

Great list! Especially, The Boogens! That movie holds a special place in my 9 year old psyche. Watching the trailer again just dredged is all back up. My sister knew that I was freaked by it, so whenever the TV spot came on she would make some excuse to get me to run into the living room. As soon as I saw what she was really up to did I run from the room screaming? Of course not! I stood rooted and watched all the way to that final POV shot and the screaming, oh the screaming. Every. Single. Time.
And to this day I’ve never watched it. Not out of any left-over psychological damage, I had just never really thought about it until reading this post. Now I have something to do over the holidays. Thanks!

Awesome list Unkle L! I remember watching You’ll Like My Mother on A&E in the early 90s and being shocked at “John Boy”. It really is a good one.
I bought The Boogens at the Monster Mania in Maryland where we met in person finally. I really enjoyed that one as well. FRED McCARREN was also in my beloved Xanadu!
I need to do one of these lists while I am on Christmas Break.

The compound is on fire. MacReady sits exhausted, his breath forming clouds of condensation. He takes a swig from the bottle.
MacReady: Why don’t we just wait here for a little while… see what happens?
MacReady stares intensely as he speaks and slowly hands bottle over.
CUT to Capuchin monkey in a red fez and vest reaching out to receive it.
FADE TO BLACK.

BOOGENS owns a big place in my heart too. It was one of the first adult horror movies I saw in the theater and those commercials really left a mark. Even though it seemed seedy and dark to me at the time it’s amazing how innocent it is now and it’s great to see a monster movie that doesn’t wink or make a joke of itself. A monster movie with slasher elements- you can’t go wrong.

FRED! I love him! I’m sad he’s dead. He reminds me of Jimmy Stewart and he and Rebecca Balding make a great couple. Love them. They’d probably never be cast in a horror movie today.

Lol. See now THAT is scary! Just imagine how scary it would have been if in HALLOWEEN, Laurie came home from school, looked out her bedroom window and saw this…. 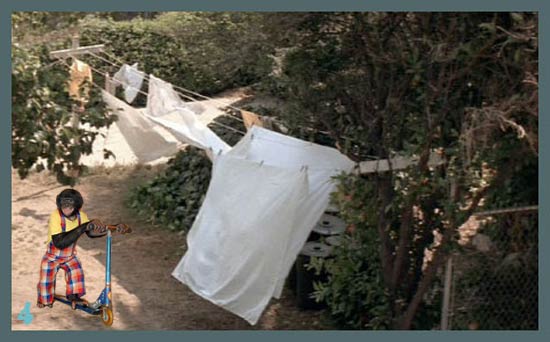 He always had it. He just lends it out now and then because of his generous heart.