Today’s selection is not so much streaming as hiding out on YouTube like a gangster. As always, when it comes to YouTube, I suggest watching it as soon as possible for fear that it might disappear. BLACK NOON (1971) delivered your Unk some genuine willies, so it’s my duty to pass the possibility of similar willies on to you. Fans of seventies T.V. movies, especially those that fret about Old Scratch coming to call, need to see BLACK NOON. Truly, it deserves to be spoken of alongside other celebrated, post-ROSEMARY’S BABY Satanic cult films of its time period. I’m thinking that the only reason it’s not more notorious is because it wears the cloak of a western. As far as delivering the horror goes though, I assure you the film has a sneakily wicked scorpion tail.

A young reverend and his wife lose their way in the desert en route to their new home. Luckily before they die of thirst, they are discovered by some townspeople who take them in and as the wife recoups, the preacher finds his services much in need as the isolated town is suffering various hardships. His presence and his preaching seem to have a positive effect. A new vein of gold is found in the local mine, a crippled boy begins to walk and a bullying bandit is disposed of. Everybody is doing the happy Bible boogie except the preacher’s wife who is getting sicker and sicker. As the wife begs to scram, the preacher finds himself more and more enthralled by the residents, particularly a beautiful mute named Deliverance. In fact, reverend’s ego is so stroked by the townspeople that he is willing to ignore a sudden rash of vivid panic dreams and waking hallucinations of a bloody anguished man. Clearly things are not quit as they appear in the town of San Melas. Something fishy and witchy is going on…

If that doesn’t pique your interest (and really why should it?) allow me to sell you on the cast. ROY THINNES (THE NORLISS TAPES, SATAN’S SCHOOL FOR GIRLS) plays the passionate, sometimes wild-eyed reverend, mac daddy super pimp RAY MILLAND (THE UNINVITED, THE LOST WEEKEND & THE ATTIC) is the town’s head honcho, and the enticingly beautiful mute cat wrangler Deliverance who scares rattlesnakes with her stare is played by a bewitching YVETTE MIMIEUX (she of THE BLACK HOLE.) We also got ourselves some porn-stached HENRY SILVA (BUCK ROGERS, TRAPPED!), some twitchy GLORIA GRAHAME (BLOOD AND LACE, MANSION OF THE DOOMED) and even a dash of DEVIL TIMES FIVE‘s LIEF GARRETT. If you need more than that you are crazy and should be put down like a rabid raccoon. To be honest, GRAHAME doesn’t have nearly enough to do, but it’s always good to see her showing up anyway.

Now you have to be a little patient with this one; it was made in 1971 which means it does not tap dance, wave sparklers and shoot gold coins and bubble gum balls out of its mouth every five minutes to keep your attention. It uncoils slowly with a subtle foreboding but when it goes in for the kill, it’s remarkably vicious. There’s actually still a ringing reverberation in my psyche from the sound of its bear trap snapping shut. Furthermore, some of the visual nails that are hammered home during the finale are remarkably ahead of their time. I’ll put the links in the comments section. The picture and sound (maybe use headphones?) aren’t the best, but I think it’s worth the extra effort. That’s it. I’m saying no more. The less known the better. Hope you enjoy this grade-A 74-minute cut of lean mean Beelzebub marinated T.V. beef and do let me know what you think!

you know i’m there.

Cmcmcmcm, I can always count on you! Can’t wait to hear your thoughts.

Okay, now that we are safe in the comments section we can talk about the ending….

If you have not seen the movie yet TURN BACK NOW!
=
=
=
=
SPOILERS APPROACHING!
=
=
=
=
Don’t do the swooping eye scan thing either….go back!!!
=
=
=
=
So, it’s pretty clear throughout BLACK NOON that something nefarious is afoot and yet the ending still shocked me.

I’d also like to point out that this ending predates THE WICKER MAN and that the 67 novel TWM is based on does not have the same ending.

I think it’s very chilling how the townspeople just start laughing in the church. It sort of reminds me of “Day of the Locust” a bit.

and those animal masks or demon faces wtf? So out of place and alarming. Holy crap they string him up in the church as it burns!

and I love the idea that they just widdled away at his sense of right and wrong. I know it’s a bit overly moralistic but it still works.

How cool is it that it closes in 1971 with the same thing happening again? Then you realize that the first scene is the previous victim’s church burning and that these demons do a sacrifice every 100 years during an eclipse? Such scope for a lil TV movie!

I also think the scene where the wife (Lynne Loring, Thinnes real life wife at the time) screams at him from the bed with that crackly voice. That totally brings to my mind Zelda from Pet Sematary (not to mention BLACK SABATH’s “Drop of Water” and the screechy sister from MADHOUSE (81)) yikes.

plus Roy Thinnes is great in this. He really got the preaching down and reminded me of Marjoe Gortner & Patrick Fabian of “The Last Exorcism”!

Thank god I did not see this as a kid because the double punch of this and Satan’s Triangle would have left me a basketcase.

I’ll also add that Yvette Mimieux was a serious stunner and that my love of Ray Miland and Gloria Grahame is growing out of control.

wow. i KNOW if i saw that as a kid i would have freaked. the gravely voiced wife in the bed with her freaky wide eyes – sheesh! and the bubble-lens type close-ups during the last dream sequence and the end were so incredibly freaky – in a way only the 70s knew how to get away with it.

i’m really glad you review it cause it is so the type of Youtube movie i would have watched 2 minutes of and moved on. It didn’t really hook me in till about the 2nd clip.

i totally dug that end too – w/ the 1971 people falling into their clutches. but i have to admit that the wife-candle doll-wig part made me laugh out loud – not that that’s a bad thing, in my book anyways.

one of my fav characters was joseph! the skinny old man w/ the tall hat – who just happened to be the skinny old super kooky room service waiter in Twin Peaks! i sooo love his sing songy voice. i’d love to see more stuff with him.

I should have mentioned to that the guy who directed this also directed SSSSSSS!

I think if I had stumbled across this on TV I would have probably changed the channel but once I looked it up on Imdb and I saw how it had scared the crap out of people I knew I had to see it.

Man, those distorted “bubble lens” shots always freak me out. Somebody needs to bring those back!

I agree Joseph ruled. I would love to see this story expanded to feature length and get into the side characters a bit more. Gloria Grahame barely had two lines & she could have been really scary.

Glad you checked this one out and enjoyed it. It’s really high up on my list of favorite TV movies now! 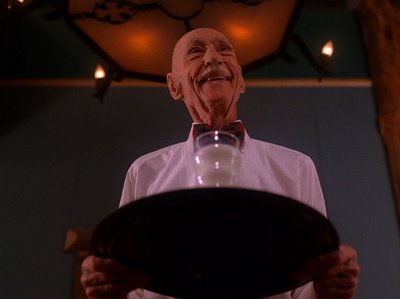