I can tell you right now that not everybody is going to like THE TALL MAN. I can say that confidently because I watched it with two other people who were as unimpressed with it as I was intrigued. According to my not very scientific experiment, exactly one third of all people will enjoy this movie and approximately two thirds would prefer to play with their cell phones. On the other hand, perhaps I should disregard my findings as I may have inadvertently raised expectations to an impossible level when I incorrectly informed the participants in my survey that the movie starred JENNIFER BEALS rather than JESSICA BIEL. Once the sad reality that the film we were watching featured not the star of FLASHDANCE but the star of SEVENTH HEAVEN sunk in, a profound malaise infiltrated the room like a radioactive fog that apparently only I was immune to. I admit that BIEL is no BEALS, but that doesn’t make it O.K. to treat her like she’s JENNA ELFMAN. She was a trooper in the TCM remake and she’s surprisingly good in THE TALL MAN playing a complicated role. In fact, the more I think about it the more I realize what a divertingly clever addition BIEL’s presence is to this movie that gets off on using the audience’s presumptions against them whenever possible.

I think director/writer PASCAL LAUGIER (HOUSE OF VOICES, MARTYRS) is brilliant and I’m not just saying that because he’s French. I found myself in the middle of this movie with exactly zero idea where it was going to head next and that’s my favorite place to be in the world. Anyone can throw a twist onto the end of a movie and exit stage left without facing the consequences, but LAUGIER flips things on their head consistently throughout and bravely holds himself and his film accountable for every rug-pull. The startup premise involves a languishing mining town that’s dealing with a rash of missing children. The locals have pinned their fears upon an enigmatic figure known only as “The Tall Man.” BIEL plays Julia Denning, an outsider who has no reason to take the whispered about legend seriously until her own child is snatched away. Honestly, I didn’t know whether to be excited or heartbroken that LAUGIER was taking on such seemingly straightforward material but as it turns out, that is just the first layer of many that he digs through. When the end credits roll, it’s difficult to believe we’re watching the same movie we started out with. The audience is dumped on shaky moral ground far closer to the art house than the slaughterhouse without even a courtesy jump scare security blanket to cling to.

So hurray for this movie for being challenging and making me feel like a gullible fool multiple times, but is it scary? My viewing partners certainly didn’t think so, but I found the dread factor sharp on multiple occasions. Don’t expect the soul curdling power of MARTYRS though; even with all the mind games at play, this is more of an earthy white trash fairy tale than a KUBRICK-ian dive into the abyss. For me, it’s unique and inventive enough to warrant acclamation and how can anyone be anything but extremely grateful after being so expertly kept on their toes? You’ll find a few really good performances too; it’s always good to see pocket scream queen JODELLE FERLAND (SILENT HILL, TIDELAND) and PONTYPOOL’s STEPHEN McHATTIE is a welcome face too. My favorite turn belongs to the effortlessly tenacious SAMANTHA FERRIS who should be instantly recognized by any SUPERNATURAL fans out there. I guess the sad truth is that if you want to do something original and different, you should expect that not everybody is going to follow. As far as I’m concerned, LAUGIER has yet to let me down and I’ll be excited to see what he does next. I’d stay clear of a FLASDANCE remake if I were him though; JENNIFER BEALS’ fans are a hard crowd to please.

Great review, per usual. I will watch this film for the simple reason that one of the stills above featured a Droopy Dog stuffed toy.

Droopy rules and he has Freddy Krueger-like powers to drive his victims insane…. 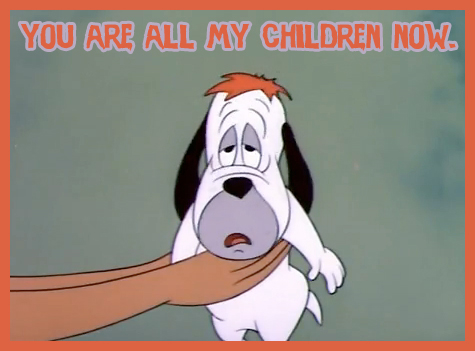 I’m indifferent to the Beals/Biels but Stephen McHattie and Samantha Ferris are enough to get me to give this a go… as is the resume so far of Pascal Laugier. I love thought-provoking horror (as well as the less than thought-provoking sort).

This movie looks intriguing, will definitely check it out!