I saw an article on your site in GEEK MONTHLY and decided to check it out. There’s lots of fun to be had, and I’m still reading it even now, but I did want to respond to your article on THE THING. Because as good as the movie is, it will never hold a candle to the original short story (“Who Goes There?” by JOHN W. CAMPBELL JR.), which I read as a child and which terrified me like nothing else. It’s an absolutely gripping read, tense and claustrophobic in a way that even CARPENTER‘s excellent (and faithful) film can’t match.

The most terrifying thing about it was that after I finished reading it and went to bed for the night, a friend of mine stopped by our house. He didn’t want to wake my parents, but he did want to see if I was awake and up for sneaking out, so he tapped on my window and whispered, “John? John, are you there?” through the curtains. Needless to say, I didn’t respond, primarily because I was sure that saying anything or even moving would result in being devoured by a shape-shifting monster.

UNK SEZ: John, thanks for reminding me just how great and effective “Who Goes There?” really is. I read it in my youth as well. In fact, before JOHN CARPENTER’s THE THING was released in theaters, FANGORIA magazine held a contest asking readers to draw THE THING based solely on the description provided by CAMPBELL‘s text. The young Unkle Lancifer worked diligently in his Trapper Keeper and produced a work that, by rights, should have changed the history of art forever. (I had just discovered a revolutionary shading technique that involved smearing pencil lines with my eraser!) I’m not sure what exactly happened, but for some reason I DID NOT win that contest. I have developed many conspiracy theories over the years. Did the editors of FANGORIA decide that my work was so astounding that I was clearly a seasoned professional with far too many awards already under my belt and therefore disqualified me?? Did my postman, having entered the contest as well, destroy my submission in order to secure his own unwarranted victory? Was JOHN CARPENTER himself involved? Perhaps he was concerned that after seeing my illustration audiences would find his film somehow inadequate! Or was it the government? Maybe THEY stepped in and destroyed my masterpiece because it was a far too convincing a depiction of an alien life form and could potentially blow the lid off their decades long U.F.O. cover-up! One things for sure, “Who Goes There?” is one story that really can really produce paranoia!

P.S.: Thanks to the beyond excellent OUTPOST 31, I have found the winning submissions to the obviously rigged FANGORIA “contest.” If you look below you will discover evidence that concludes, without a shadow of a doubt, that I have been robbed! FANGORIA, if you’re reading this, it’s never to late too make amends. Simply print a retraction in your next issue that states that you acknowledge the fact that you made a HORRIBLE, HORRIBBLE, MISTAKE!

NOTE: For even more horrible mistakes related to THE THING go HERE.

That Draw The Thing contest was great! I looked back on the winning entries awhile back and was surprised to realize that one came from soon-to-be genre scribe Chas. Balun. In your pic, it’s the second one in from the top right. Fango also ran another contest that was even cooler that challenged readers to draw a three way face-off between slasher icons Jason, Leatherface and Michael Myers. The winning entry was a several pages long comic book style tale that was a great read with lots of humor that featured a last minute appearance by The Thing as Fango editor Bob Martin transforms at the end.   Sadly, you’d never see any magazine today devote five or six pages to a fan-drawn comic book story in favor of spending those pages covering the latest and lamest studio pic.  But things were a little looser back then and less business-driven.

Jeff,
I always loved the third one in from the top left with the black background. Of course, truth be told, all these drawings were light years better than mine but I remember dying in anticipation for the winners to be announced. I also used to send drawings to Rob Bottin himself care of Universal studios but they would come back unopened with an address change stamp on them!!!

That’s a bummer that Bottin himself  never checked out your stuff, Unk! And yeah, I was impressed by all the final Thing drawings when they were published. I’m something of an amateur cartoonist myself but I didn’t send in an entry – I’m sure nothing I could come up with would’ve made the grade!

Any way to make that picture bigger?

Stavner, the source pic is really small so it does not look that much better blown up…

I gave it a shot though, try this…. 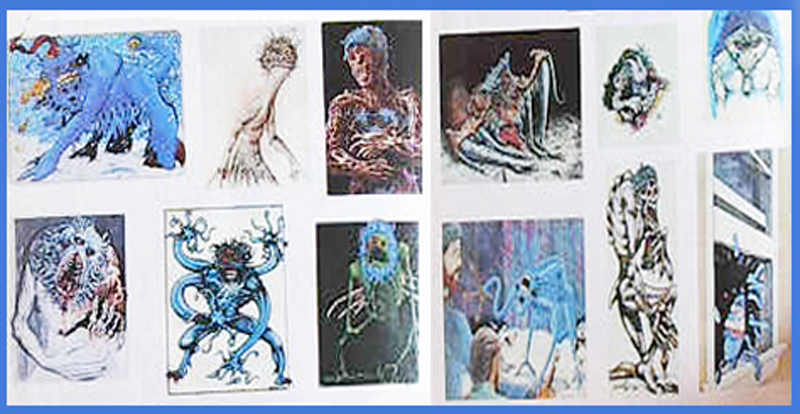 Sadly, I don’t have my old Fango anymore or I’d scan it for ya.

I own that issue of Fangoria! It is issue #21. I bought a stack of fan mags in a junk store a few years ago for $1!  I have seen that movie so many times it’s ridiculous – I have “Who goes there” in a great short story collection called “Reel Future”. It contains 16 classic sci-fi stories that were made into feature films. Including “Herbert West – Re-animator” by H.P. Lovecraft. This book can be bought for the price of shipping from Amazon.