During the first half of the 1990s, which I remember as a generally underwhelming time for Kindertrauma TV, late night HBO blissfully bludgeoned my unsuspecting young mind with everything from Suspiria to Scissors to Sorority House Massacre 2. All of those movies made a lasting impression. But none of them traumatized me like Fabrizio Laurenti’s Witchery, starring David Hasselhoff and Linda Blair.

In 1991, I was eight years old. At this point, I was already obsessed with horror movies. I often tracked them down by watching The Prevue Guide Channel, an oddly hypnotic station on which T.V. listings would rise in an endless scroll across the bottom half of the screen, while previews of coming attractions for movies like Rent A Cop played on top.

One night, I became fascinated by the Prevue Guide trailer for Witchery. So far as I recall, the trailer included four scenes: a girl in a wheelchair saying “Your dad shouldn’t buy that house! My mom told me, a witch lives there!,” a woman standing in a black cloak on a beach, Linda Blair decked out in a nightgown and huge hair laughing maniacally in a voice that was not her own, and the word Witchery, the letter “T” replaced by an inverted crucifix.

At that age I was already enthusiastic about ominous children, excessive women, spooky houses, and the defilement of religious imagery. I did not know the meaning of this word “witchery,” which sounded like witchcraft only somehow more sinister. In my head I imagined that the movie was about a brothel or women’s boarding house full of witches. I had to see it. Unfortunately, Witchery was airing on Showtime, and my family didn’t get the channel. So I waited…waited…waited… Finally, months later, it appeared on HBO in the middle of the night, and I taped it.

I watched in awe as a group of sinners ended up at a mysterious, deserted hotel on an island in “Massachusetts.” One by one, they were transported to some kind of alternate dimension where they were brutally raped, tortured, and/or murdered by the deformed minions of a glamorous old woman in a black cloak. The woman might have been the vengeful ghost of a pregnant witch who (in flashback) jumped from a window to her death to escape murderous pilgrims, or she might have been a has-been Hollywood actress. Or both. The movie leaves it artfully ambiguous.

To me, this was one of those movies that, pre-Internet, seemed so weird that they could only have been documentaries transmitted directly from other worlds. There was so much I didn’t know when I watched Witchery: I didn’t know that it was (or would one day be) considered to be notoriously awful by many horror geeks. I didn’t know that Hildegard Knef, the evil old woman, was a totally chic and fabulous German movie star and chanteuse. Sometime later, when I first saw Baywatch (which had mysteriously escaped my un-monitored eyes up to that point), I thought “Oh! That’s the guy from Witchery!” when The Hoff appeared on screen.

I also didn’t realize, while I was watching Witchery, that it was traumatizing me. While watching the movie, I didn’t notice feeling scared. But something about Witchery got to me and, like most traumas, the effects didn’t occur until later. In the coming days and weeks, I couldn’t stop thinking about Witchery’s weird atmosphere. When I looked in the mirror, I’d be petrified of seeing Hildgard Knef’s scary diva face looking back at me (a recurring warning in the film). I was haunted by a horror movie convention that always gets to me: a film projector that mysteriously ran on its own without being plugged in, showing the visitors avant-garde witchy cinema. For the first time, I found myself having an existential crisis, pondering questions like “Can one really feel good that some of the characters escaped the island at the end of the movie, when they first had to watch their loved ones be brutally murdered?”

Witchery haunted me so much that I launched a personal boycott against anything that had to do with the horror genre for what seems, in my memory, like years (in reality, it might have been months). I taped over Witchery with “Paul Simon at Central Park.” When that wasn’t enough to destroy its evil powers, I hid the tape in the back of my closet in my old bedroom (where it probably still resides!). Not since the Flowers in the Attic crisis of 1989 had my world been so up-ended by media, and nothing has had such an effect on me since.

Like so many kinder-traumatized, I watched the object of terror again over a decade later and thought that much about it was kind of inept and funny. And yet sometimes, when I go to bed anxious, I still dream that Hildegard Knef is coming to get me. And sometimes, when I wake up in the middle of the night and half-consciously wander to the bathroom, I start to worry that maybe, just maybe, I’ll see her staring back at me from the mirror…

I read this and watched the trailer and wondered how I’d missed it; I was working for a chain of theatres in 1988 and saw everything that got a theatrical release that year. So I looked it up and saw it was direct-to-video. Then I saw the video cover and said, “Ohhhh, it’s THAT one.” I’ve seen the box about a gazillion times but have never been sufficiently intrigued to watch it. I’m suddenly ambivalent about that decision…

Thanks so much for posting! I *love* the screen shots–especially the fundamentally important Big Bird Tape Recorder!

I love that Annie Ross (Short Cuts , Basketcase 2&3) is in this movie too!

I passed this one up on the VHS rental shelf when it came out too!

I finally caught up with it a couple years ago and liked how bizarre and strange it was. I’m thinking there must have been some Troll 2-ish language barrier going on during the making of this.

Thanks for the great traumafession! I’m a little surprised that they were able to use Big Bird and Oscar in this movie and not get sued! I gotta get that tape recorder.

This insane one has a proud place in my DVD collection. So love the “WTF?” expression that closes it out.

That is one very appropriate closing image! 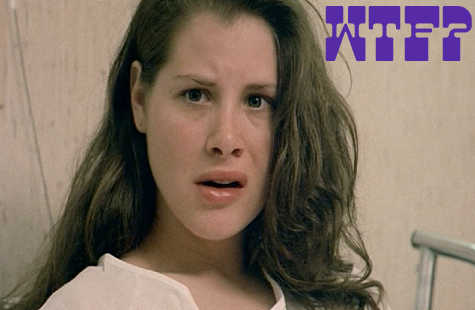 I would have loved to hear their version of “No More Tears (Enough is Enough)”.

Haha. I was thinking “Our Lips are sealed” so that the video could include the scene of Ross’ mouth being sewn shut from the movie!

I caught this little gem back in college on Cinemax. The demon rape scene freaked me out the most because aside from the mouth, the guy (to me) was hot in a Freddy Mercury/Frankie Goes to Hollywood kind of way.

One summerin the late 80s I was staying with a friend who had batches and batches of straight-to-video horror fare (I think they shoplifted a lot). And every night we’d have a few drinks and watch these horrible movies one after the other all of them terrible. Then one night we stumbled across WITCHERY and it really caught my attention. Im not saying its PERFECT….but when it hits it right it REALLY hits it right in my opinion.
It was one of those movies that ‘stayed with me; through the years. Not cuz it was GREAT or real QUALITY STUFF , mind you, just cuz some scenes really stick with me as being gross , spooky and unnerving .

I rented it a few years ago and found I wasnt disappointed. Because even though its not the best movie ever made by a long shot, it does have some really spooky and nasty stuff snuck in here and there that really does get stuck under your skin

mamamiasweetpeaches: I totally agree with you! Even though there are elements in the film that induce chuckles, in other ways it’s legitimately effective and unique.

I’m with you guys. Even though the acting and story are wonky there’s something about those scenes in the netherworld place (with those cackling robed torturers) that is convincingly hellish.

And sometimes really stilted acting (like Leslie Cumming’s) can add a strange trance like element for me. It’s like a dream that makes no sense when you take it apart but freaks you out anyway.